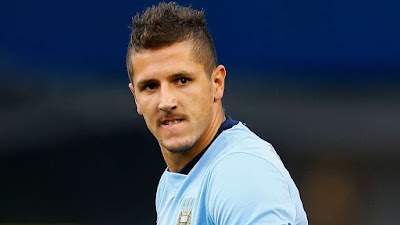 Monaco striker Stevan Jovetic has revealed that he rejected Real Madrid and Juventus before sealing a transfer to Manchester City from Fiorentina in 2013.


Jovetic began his career at Partizan Belgrade before getting snapped up by Fiorentina in 2008.
The mercurial attacker emerged as one of Europe's brightest young talents at Stadio Artemio Franchi, scoring 40 goals in 134 appearances across all competitions.
His performances in Serie A eventually earned him a £22 million ($29m) move to City, but he struggled to adapt to the rigours of English football and failed to earn a regular place in the starting XI at the Etihad Stadium.
Jovetic was shipped out on loan to Inter in 2015, who signed him permanently the following year after an encouraging season.
However, the 30-year-old failed to maintain his form in the 2016-17 campaign, and ended up joining Sevilla on loan before completing a switch to Monaco.
Jovetic has also flattered to deceive in Ligue 1, with the general consensus being that he has never quite managed to live up to the potential he showed as a younger player.
The former City ace claims that his career trajectory could have been quite different if he'd accepted an offer from either Juve or Madrid before undertaking a new challenge in the Premier League.
"My time in Florence was unique, it's a splendid city with passionate people," Jovetic told Gazzetta dello Sport.
"I went to Manchester City in 2013, out of ambition. I wanted to join Juventus but I could never betray my [Fiorentina] fans. At the same time, however, I wanted to win the Premier League, the most difficult championship of all, and I also won the League Cup - unforgettable memories.
"The mistake was to reject Real Madrid in 2009, I wasn't ready. If could go back..."
Article continues below
An anterior cruciate ligament injury stalled Jovetic's progress at Monaco earlier this year, and he has yet to feature for the club this season.
The Montenegro international is contracted to remain at Stade Louis II for two more years, but he refuses to rule out a return to Italy at some point in the near future.
He added: "The contract with Monaco is valid until 2021, I have a deep respect for the club. I will always give 100 per cent, and then [in the future] who knows... Italy is my second home, one day I would be happy to come back."
Sports