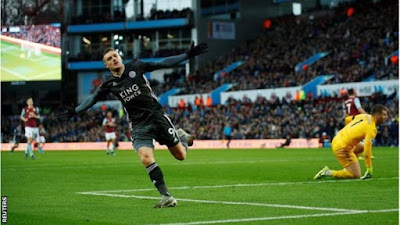 His club Leicester, shock champions four seasons ago, are flying again in the Premier League, thanks in large part to a formidable scoring run from the ex-England man.


So is Vardy playing better than ever?
Is he, even, the best striker in Europe?
"He's too good, he's ridiculous. He gets quicker and quicker at 33 years of age," said BBC Radio 5 Live pundit Clinton Morrison after watching Vardy score for an eighth consecutive Premier League game in Sunday's win over Aston Villa.
Leicester go into Saturday's home game with Norwich (15:00 GMT) as Liverpool's nearest - and according to Morrison, only - title rivals.

How does Vardy compare to Europe's top strikers?

Click to see content: top_scorers_top
Vardy is the top scorer in the Premier League this season with 16 goals in as many games, including 11 in his past eight - five clear of second-placed Tammy Abraham of Chelsea.
Only Lazio's Ciro Immobile - with 17 - has scored more in Europe's top five leagues this season.
Only Barcelona's Lionel Messi has scored more league goals in the calendar year, with 33 in 29 games.
Vardy and Bayern Munich's Robert Lewandowski have scored 28 each - although the Pole can boast a further 10 goals in the Champions League - with Paris St-Germain striker Kylian Mbappe next on 27.
"Lewandowski has been doing it for many years," said former Crystal Palace and Republic of Ireland striker Morrison.
"In overall play they're totally different - he's probably better than Vardy outside the box. But Vardy is a superb player. Under Brendan Rodgers he's getting better and better."

How does Vardy's goal tally compare to his previous seasons?

Click to see content: vardy_goals_season
Vardy's 16 goals this season mean he is already two-thirds of the way towards his best total of 24 Premier League goals in Leicester's title-winning season of 2015-16. He has another 22 games to get those eight goals.
His average of a goal every 90 minutes is better than in each of his previous Premier League seasons (it was a goal every 131 minutes in 2015-16) and he is having a shot on target every 55 minutes, which is also his top-flight career best.
His average of a shot every 35 minutes is comparable to last season, but not as good as his figure of 27 in 2015-16.
However his team are less reliant on his goals. In 2015-16, Vardy had scored 15 goals in his first 16 games. Without those, Leicester would have picked up 16 fewer points. This season his 16 goals have only been 'worth' eight points.
Vardy is the first player to score in eight consecutive Premier League games since... Vardy in 2015-16, when he scored in 11 games in a row. He is only the second player - after former Manchester United striker Ruud van Nistelrooy - to have such a good scoring run on two separate occasions.
Not bad for a player who started the decade with Stocksbridge Park Steels.

Click to see content: top_conversion_rate
Among players with five goals or more, Vardy's shot-conversion rate is better than any other player in Europe's main five leagues. He has scored 39% of his shots (28.2% was his best record two seasons ago).
La Liga top scorer Messi has scored 30.8% of his shots this season and Serie A's Immobile is on 29.3%. It is 26.2% for Ligue 1's Wissam Ben Yedder, while Bundesliga main man Lewandowski has netted 24.6% of his shots,

Is he playing differently?

So why is Vardy - who should be in the twilight of his career - enjoying his best season yet?
In part it is down to new instructions from Rodgers, who has told him to close down defenders less so he can make runs in more important places.
In November, the former Liverpool and Celtic boss said: "From a defensive perspective he is not having to press the whole back four.
"He is a guy who will run all day for you. Now it is a lot more synchronised in how we want him to press and he is doing short bursts of pressing, which he is very good at.
"He is playing more in the corridor and central. The other guys, it is their job to create opportunities for him and others. He is a really top striker at this level and we have done some little adjustments which have helped him."
His stats bear out this portrait of a new, more efficient Vardy.
He is having fewer touches per 90 minutes than in any of his previous Premier League seasons - 21.9 compared to 35.1 in his first top-flight campaign.
But a higher percentage of those are in the opposition penalty area - and are shots - than in any of his previous five Premier League campaigns. Over 27% of his touches are in the other team's penalty box, and 11.7% of his touches are shots.
Vardy - who has effectively retired from England duty - has scored 25 goals in 26 games since Rodgers was appointed in February, eight more than any other player in the division.
Former Millwall and Wales striker Steve Morison told BBC Radio 5 Live that Vardy is "relentless and constantly working".
"Brendan has put a team together who suit him - on the shoulder doing what he does best. When he does that he's unstoppable."
Perhaps most tellingly Rodgers said earlier this month: "For me, it's like having two players up there because of his work and his threat.
"People sometimes ask me, 'Why don't you play with two strikers?' Well, when you have the likes of him and Luis Suarez, who I had at Liverpool, it's
Sports