I would've loved Neymar to return to Barcelona says Messi 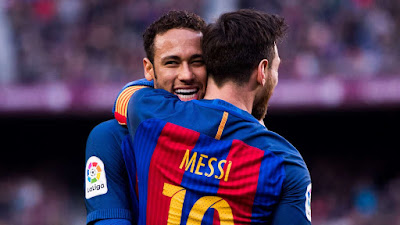 Lionel Messi says he would've loved to have seen Neymar return to Barcelona but claims that he isn't disappointed at the club for failing to secure a move for the Paris Saint-Germain star.


The duo spent four seasons together at Camp Nou following the former's move from Santos, and with Luis Suarez's arrival a year later the deadly MSN trio was formed, shattering scoring records and helping Barca to a host of trophies.
Their association ended in 2017, however, when Neymar left for PSG in a world-record move.
Barca were keen on bringing the Brazilian back to La Liga in the summer transfer window, with negotiations between the two clubs continuing right until the final hours of deadline day on September 2.
No deal could be agreed in the end, however, with Messi expressing how he would've liked to have linked up with his former team-mate once again in Spain.
"I would have loved for Neymar to come," the Argentine told Sport.
"Honestly, I don't know if Barca did everything possible to get him back but I'm sure negotiating with PSG isn't easy.
"I am not disappointed. We have a spectacular squad that can fight on all fronts, without Ney as well.
"On a sporting level Neymar is one of the best in the world. And with him on the sponsorship and image front the club would have also taken a step up."
Reports in Spain had claimed that Messi and his team-mates were demanding the signing of Neymar, although the Argentine claims that, while the squad gave their opinion, they didn't insist on the 27-year-old being brought back in.
"We never asked for Neymar to be signed, we just gave our opinion," he added.
Article continues below
"Do I run things [at Barcelona]? It has been demonstrated that it is not the case."
Messi is yet to play for Barcelona this season after suffering a calf injury in pre-season.
Sports