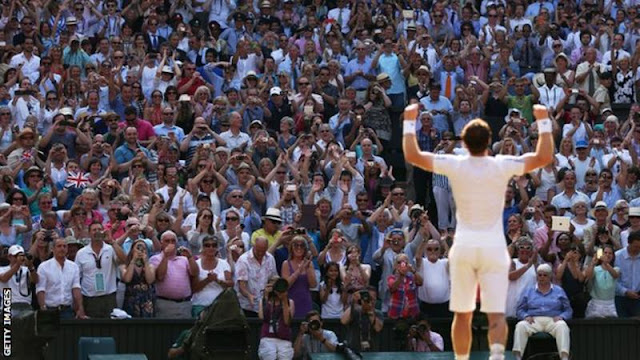 
It even swiftly spins through the third set with Murray again recovering from a break down to sensationally conjure a 5-4 lead. And pause.
Andy Murray, 26, from Dunblane in Scotland, was about to serve for the Wimbledon title after almost three hours on centre court and I think it hit us all.
"It" hit us. That very unique sporting sensation. You've felt it, right? The abstract sense of the imminent unknown. "It" had most definitely arrived.
What on earth was about to happen?
The noise at the changeover was incredible. Words can't do justice to noise at great sporting venues, you need to hear it, you need to feel it. This, from the Centre Court Chorus, was a cacophony of support, elation and fear.
That noise, in those 90 seconds, will never ever be heard again. So loud, so impassioned, it was like Murray was about to play the final game of his life.
I couldn't talk in the commentary box, needing to gather my thoughts. John Lloyd and Richard Krajicek shuffled anxiously beside me. "Time!" bellowed Mohammed Layani from the umpire's chair, playing up to his role, increasingly-exuberant calls laced with a similar sense of anticipation.
Time, indeed.
"Andy Murray of Great Britain is serving for the Wimbledon title..."
I first met Andrew Murray when he was 16 and vividly remember his first Davis Cup trip in 2004, juggling tennis balls with both feet to the amusement of Tim Henman and Greg Rusedski in a Luxembourg leisure centre. It was immediately obvious this was a story, as a journalist and commentator, you dreamed of reporting.
Things moved quickly the following year; an extraordinary Wimbledon debut, bravely qualifying and winning a round at the US Open, a first ATP tour final in Bangkok, a victory over Henman in Basle to become British number one. Yet domestic dominance was of no interest. He wanted to take on the world and we witnessed, as we started to get to know him, that incredibly single-minded ambition first hand.
With a small bunch of the British media following his every turn, the story was building. The ranking climbed, attention grew, pressure intensified. At times it was tricky to tell the story from the frontline because we could see his faults - and with every defeat came analysis of the faults - yet we could see they were far outweighed by his strengths.
We knew this was a story of lifetime. There were ups and downs in the player/journalist relationship but one desire remained constant; to tell this story through to a logical conclusion.
And that conclusion was the Wimbledon title.
So here we are, back on Centre Court. Gone 5pm. The noise, the nerves, the moment. Serving for the title. The sun still raking down.
Murray wins the first three points only to lose the next three. Fizzing anticipation almost blows, but not quite.
They were match points, by the way, championship points, history points.
40-15, 40-30, deuce, advantage Djokovic. Four points in a row. Djokovic thought he had him. Sneaky grin. Bond villain time.
A ridiculous sequence of see-sawing ensued.
The deuce points were fine, pressure off. Even the break points for Djokovic were manageable. Murray played some of his finest tennis at those key moments. Joy and relief all round.
We were all feeling it. As a commentator, you're neutral. But I was willing him over the line because, like everyone else, I knew this was it. He had to win it here.
The hardest point to win is the last, so the maxim goes, and I firmly believe the closest Murray came to defeat was when he lost a third match point.
Imagine, just imagine how that must have felt. On the brink of victory yet also the brink of defeat. Make no mistake that's where he was.
Match points lost, mind racing, body rushing, arm shaking. His racket arm literally shaking before his sweat-masked eyes, the peak of his baseball cap protecting him from the glare of 16 million people, one serve from greatness.
And that's why this story is such a compelling one, the achievement so great. Not so much the history, the 77 years, the ghost of Fred Perry. Very simply how, Andy Murray - how on earth - did you win that match in that insanely frazzling situation?
After a nerve-defying serve to the Djokovic backhand, the ball flew up defensively and the crowd gasped collectively. Some yelped, as if stung. "Here it is, here it is" I remember saying. "Murray forehand, Djokovic backhand... into the net! Murray's the Wimbledon champion!" It was such a relief to utter those words.
Breathe.
Ever the dull professional journalist, I'd only ever shaken Murray's hand after victory. Even after his first Grand Slam title at the US Open 10 months earlier. "Well done, congratulations."
Not this time. There was delirium tinged with disbelief behind the scenes. The champion emerged around a corridor corner in a white tracksuit, looking ready for sets four and five.
"Do I get a hug for that?" he said with his usual sarcastic drawl. Sure thing. He then insisted on holding my microphone for a photograph. It wasn't plugged in, he wanted to hold it anyway. We were all a bit doolally by that stage.
Murray won Wimbledon again, in 2016, but nothing will ever pierce our emotions in the same way as that day.
I suppose if he were to do it a third time, with a metal hip, having recovered from multiple near-career-ending surgeries, I'll revise my judgement. He's such an incredible human, anything's possible.
But even then, would it surpass the first time? That time?
Sunday, 7 July 2013 will be forever etched in British sporting history. The day of the decade, perhaps, and for men's tennis the day of seven decades, plus.
It was the day we all bonded over a dream and a celebrated together as a nation. The day sport truly touched our souls. The day we all felt like winners.
Sports