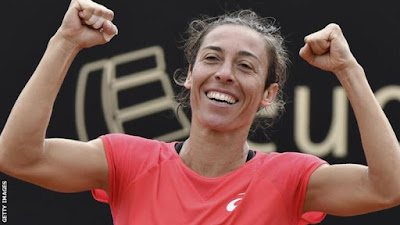 The 39-year-old became the first Italian woman to win a Grand Slam with her 2010 Roland Garros triumph and won eight titles before retiring in 2018.


Schiavone, who has not revealed the type of cancer diagnosed, said: "I did chemotherapy, I fought a tough battle and now I am still breathing.
"I have won this fight. And now I am back in action."
In a short video on Instagram, Schiavone added: "Hi everyone, upon seven-eight months of silence from social media and from the world, I wish to share with you what happened to me. A cancer had been diagnosed to me."
Having defeated Australia's Samantha Stosur in the 2010 French Open final, Schiavone reached a career best fourth in the world rankings in January 2011.
Later that year she came close to defending her French title but lost to China's Li Na in the Paris final.
After retiring following last year's US Open, Schiavone said: "When I was 18 years old, I had two dreams. The first one was to win Roland Garros, and the second one was to become top 10 in the world. And I completed them, so I'm very, very happy, and lucky."
Health Sports