Firmino, Keita, Mane & now Minamino: Rangnick reveals why Liverpool have signed so many of his former players 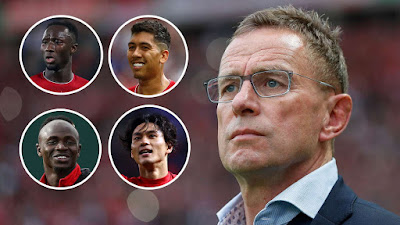 Ralf Ragnick has explained why Jurgen Klopp has signed so many of his former players while in charge at Liverpool, insisting they share the "same mentality".


As reported by  Goal , Liverpool are set to sign Red Bull Salzburg winger Takumi Minamino for a bargain fee in January, with his release clause set at just £7.25 million ($9.6m).
The 24-year-old shone for the Austrian side during their 2019-20 Champions League campaign, which came to an end on Tuesday as they suffered a 2-0 defeat at home to the Reds.
Speaking before that contest, the ex-Leipzig and Hoffenheim head coach Rangnick insisted that he has had a big influence on Klopp in terms of his recruitment policy at Anfield.
Rangnick, who now serves as Red Bull's head of sport and development, says it's "no coincidence" that Liverpool have brought in a number of key players from clubs he has been involved with.
"Klopp doesn't have to thank me," Rangnick told reporters in Salzburg."It's definitely no coincidence that he has four former players of mine [Roberto Firmino, Naby Keita, Sadio Mane and Joel Matip] because it shows that he is, in fact, looking for the same kind of players, with the same assets, with the same mentality as we do.
"And, I think, out of the top clubs in Europe, he's probably the coach with the highest number of former players from us."
Rangnick now primarily oversees Red Bull's teams in New York and Sao Paulo, while retaining some influence behind the scenes at Leipzig.
The 61-year-old added on the similarities between his own footballing philosophy and Klopp's: "The style is very similar to Jurgen's.
"It's proactive, it's high pressing, counter-pressing. Once we have won the ball we don't want to waste any time by square passes or back passes.
"We are trying to play forward as quickly as possible, trying to create chances, trying to score as many goals as possible."

Rangnick was Salzburg's sporting director when they signed Minamino from Cerezo Osaka in 2015.
The German coach went on to highlight the Japanese star's technical ability, as well as his willingness to press high up the pitch and win the ball back for his team.
"You could see he was good on the ball, very technical, good mentality," Rangnick said. "He is also like many Japanese players, willing to invest in the team's efforts to win the ball back.
"Of course he had to learn those things tactically, but his willingness and his mentality was already there. He's not the kind of player to say, 'OK the other team has got the ball so, please let me know once we have the ball so I then can take part in the game again.'
"Even at the age of 19 you could see he was a good boy."
Article continues below
Rangnick has been linked with the top jobs at Arsenal, Manchester United and Everton in recent times, but he insists that none of the club's in question have been in contact with him and that he's happy in his current role.
"Of course any big club in England should be attractive, but also there has been no contact between the relevant clubs and myself," he said.
"I'm very happy and my full focus is on my job at Red Bull. Should that change it takes a lot (not money) because I'm more than happy with what I'm doing now."
Sports