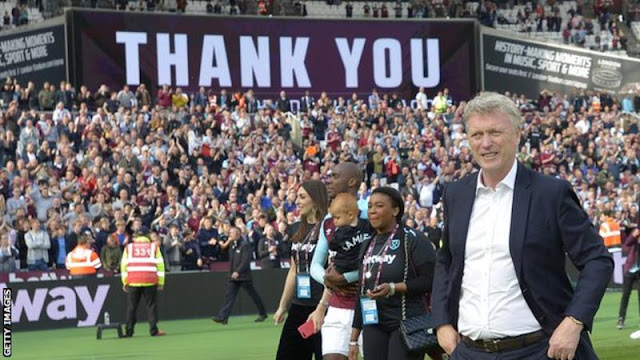 The 56-year-old Scot is back at the club on an 18-month contract with a point to prove and a large helping of humble pie being served up in the West Ham boardroom.


When Moyes was previously thanked for his services as he departed in May 2018, joint chairman David Sullivan said: "We feel that it is right to move in a different direction. We aim to appoint a high-calibre figure who will lead the club into an exciting future."
That "high-calibre figure" was Manuel Pellegrini, sacked on Saturday night after 18 months in charge, the decision taken after a 2-1 home defeat by an under-strength Leicester City.
Moyes' return is an acceptance that the ploy of appointing Pellegrini has been an expensive failure and they must start all over again with the Scot, whom they had formerly deemed not fit for their much-heralded "exciting future".
So what next for West Ham and Moyes?

Moyes must win over doubters

The reaction from West Ham's supporters to the news of Moyes' appointment was - to put it mildly - lukewarm, and hints at how he must fight to rebuild his credibility.
When Moyes was heavily linked with a possible return to Everton as successor to Marco Silva - a job he came very close to getting until Carlo Ancelotti was sacked by Napoli - the reaction among supporters was toxic, causing pause for thought in the Goodison Park boardroom.
Moyes did a fine job at Everton, although he did not win a trophy in 11 years, but he was regarded among large sections of support as yesterday's man, with a recent record of failure.
He also saw his relationship with his former club and their fans deteriorate after what Everton described as "derisory and insulting" offers to take former players Leighton Baines and Marouane Fellaini to Manchester United after leaving in 2013.
This has been mirrored in the response of Hammers fans, despite his success in stabilising the club in his previous spell by guiding them from the relegation places to 13th at the end of the season, winning eight out of 27 league games.
It was not enough for West Ham's hierarchy to offer him a long-term deal then, although they have rectified that now.
Where he has a problem, with image and credibility, is that miserable record stretching back six years.
Moyes left Everton for Manchester United as the personal recommendation of the retiring Sir Alex Ferguson, his reputation glowing after his time at Goodison Park.
Since then he has been sacked after only 10 months at Manchester United, dismissed by Real Sociedad in La Liga after 12 months and was in charge when Sunderland were cut adrift and relegated in 2016-17, winning only six league games.
There is no doubt, despite the respectable spell at West Ham, that Moyes' reputation has been damaged and he will need quick wins to dispel the scepticism among fans.

Is Moyes actually a perfect fit?

Moyes should not simply be dismissed because of the decline in his career and fortunes since leaving Everton - he will certainly bring some realism and pragmatism to West Ham's current plight as they lie 17th, one point off the relegation places.
He will relish being back out on the training ground working with West Ham's players, always regarded as his great strength, and there is no doubt there is more quality in this squad than the one he left behind.
Moyes will start by making his side harder to beat, helped in that quest by the return to fitness of outstanding goalkeeper Lukasz Fabianski, whose injury and replacement by the hopeless Roberto was the beginning of the end for Pellegrini.
It will be intriguing to see how Moyes marshals his forces - can he coax the best out of creative midfielders Felipe Anderson and Pablo Fornals, and supply ammunition for £45m record signing Sebastien Haller?
Moyes has plenty to work with - presumably including leverage with owners who have had to go back to him after effectively deciding he was not glitzy enough in May 2018.
He is now in a position of greater power, as proved by his longer contract. West Ham, having invested in him, must help him complete the "unfinished business" he feels he has in east London.
Survival, galling as it may sound to those inside a boardroom with such lofty ambitions, is the first goal and now they must offer full support for the man they have brought back in their latest crisis.
Now is the time for sweat and hard work at West Ham, not stardust, so Moyes may yet be the man to defy those who have been so quick to criticise his return.
Sports