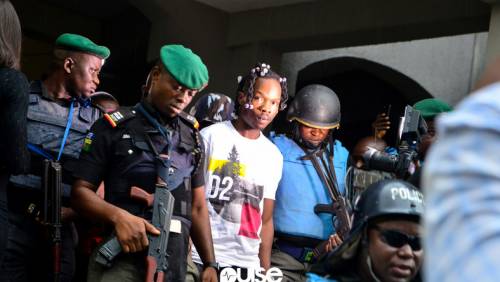 The trial of musician, Azeez Fashola widely known as Naira Marley, continued on Thursday at the Federal High Court in Lagos.


Nuru Buhari, an operative of the Economic and Financial Crimes Commission, told Justice Nicolas Oweibo that the laptop retrieved from the defendant during investigation does not show either it was used for crime or not.
Buhari stated this while being cross-examined by Naira Marley's counsel, Olalekan Ojo (SAN).
When asked how he accessed the Laptop without the owner's password, Buhari replied that as a cybercrime hacker, he doesn't need to know the password of anybody because it was part of his training.
Justice Oweibo later adjourned further trial to February 27 and 28, 2020.
Naira Marley is being prosecuted by the EFCC on an 11-count charge of conspiracy, possession of counterfeit cards and fraud.
His co-defendant is one Yad Isril, who is said to still be at large.
Naira Marley pleaded not guilty to all 11 counts.
He was also granted bail in the sum of N2m with two sureties in like sum.
According to the charge, the defendant committed the offences on different dates, November 26, 2018, December 11, 2018, and May 10.He and his accomplices are said to have conspired to use different ATM cards to defraud their victims.
The offences contravene the provisions of Section 1 23 (1) (b), 27 (1}, 33, 33(9) Cybercrime (Prohibition) Prevention Act, 2015.
Entertainment