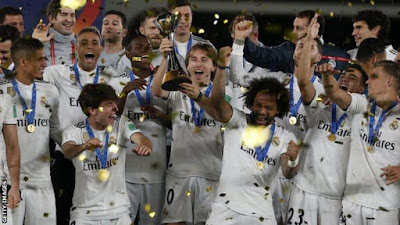 The changes, including the frequency it is held, have been outlined in a tender issued to potential investors, commercial partners and media.


The annual competition, which currently features seven teams, is scheduled to be expanded from June 2021.
The expanded format was implemented despite fierce opposition from Uefa.
China is set to host the first edition of the larger tournament, with Gianni Infantino, the president of football's world governing body Fifa, describing it as "the first real and true [Club] World Cup".
It will be held in June and July, starting with a play-off between the Oceania representative and the third Asian qualifier, and includes eight clubs from Europe.
However, detail within the tender suggests the revamped event, to be held every four years, could be changed beyond recognition if Fifa receives valuable enough proposals.
In their tender, which has been seen by the BBC, Fifa say its objective is to find partners to create "the world's greatest club football experience".
In the document, Fifa states: "Should an interested party wish to do so, it may also submit a proposal for future editions of the tournament (which is currently envisaged to take place every four years) and which may include suggestions for alternative Tournament parameters, including as to frequency, format, qualification process and team participation."
The words will alarm European football's governing body Uefa, who fear the Champions League will be undermined by any significant competition to their dominant club competition, triggering a reduction in broadcasting revenue.
Potential investors have been given 11 days to come up with a proposal. The document does not say what would happen if a direct competitor to a current sponsorship partner made a better offer.
Sports