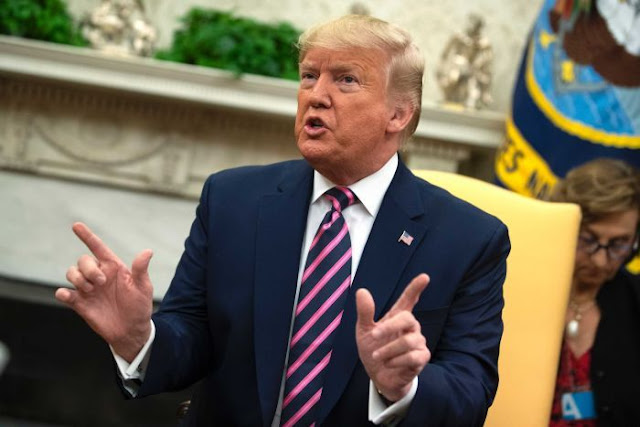 The Democratic-led House of Representatives voted largely along party lines to impeach US President Donald Trump for obstruction of Congress and abuse of power over his dealings with Ukraine.


Trump is only the third United States president to be impeached. No president has ever been removed from office via the impeachment process.
The landmark votes on Wednesday set up a likely January trial in the Republican-controlled Senate, where Trump is expected to be acquitted.
As politicians move to the trial phase, here's what to expect next:

1. On what charges was Trump impeached?

Trump has been impeached on charges that he abused his power in office and obstructed Congress during the impeachment investigation.
Democrats accuse Trump of pressuring Ukraine to open an investigation into the president's political rival and former vice president, Joe Biden, who is also a frontrunner in the 2020 Democratic presidential race. They also charge that the president obstructed their investigation by refusing to comply with subpoenas and directing members of his administration to do the same.
The impeachment inquiry, launched in September following a whistle-blower complaint, was centred on a July 25 phone call during which Trump asked Ukrainian President Volodymyr Zelenskyy to open an investigation into Biden and his son, Hunter, who had served on the board of a Ukrainian gas company. There has been no evidence of wrongdoing by the Bidens. 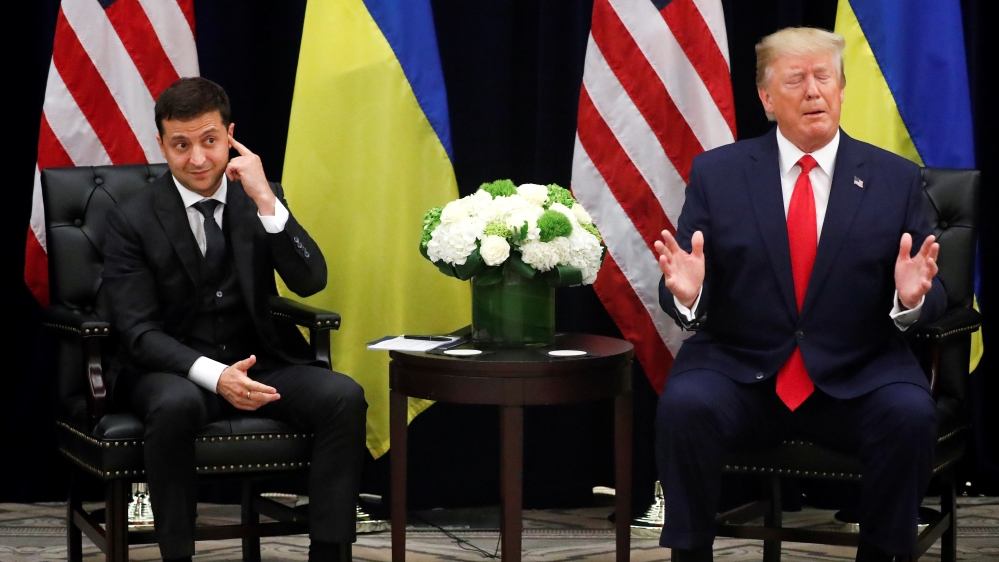 Zelenskyy speaks during a bilateral meeting with Trump on the sidelines of the 74th session of the United Nations General Assembly (UNGA) in New York City [File: Jonathan Ernst/Reuters]
Trump also wanted Zelenskyy to investigate a debunked conspiracy theory that Ukraine, not Russia, interfered in the 2016 US presidential election.
At the time of the call, the Trump administration was withholding nearly $400m in Congress-approved military assistance from Ukraine.
Citing testimony by current and former US officials, Democrats also accuse Trump of leveraging a White House meeting that Zelenskyy wanted in exchange for the investigations.

The articles of impeachment are now expected to be sent to the Senate, where senators will consider evidence, hear witnesses and vote to acquit or convict the president. The chief justice of the US Supreme Court presides over the trial.
A two-thirds majority vote is required in the 100-member Senate to convict and remove a president from office. A conviction appears unlikely in the case of Trump.
The Senate is made up of 53 Republicans, 45 Democrats and two independents who caucus with the Democrats. At least 20 Republicans would have to vote with all Democrats and the two independents to remove the president from office.
Senate Majority Leader Mitch McConnell has indicated that he would like swift proceedings, but the president has said he would not mind a robust trial, with testimony from a number of witnesses, including Biden and the whistle-blower whose complaint led to the impeachment inquiry. 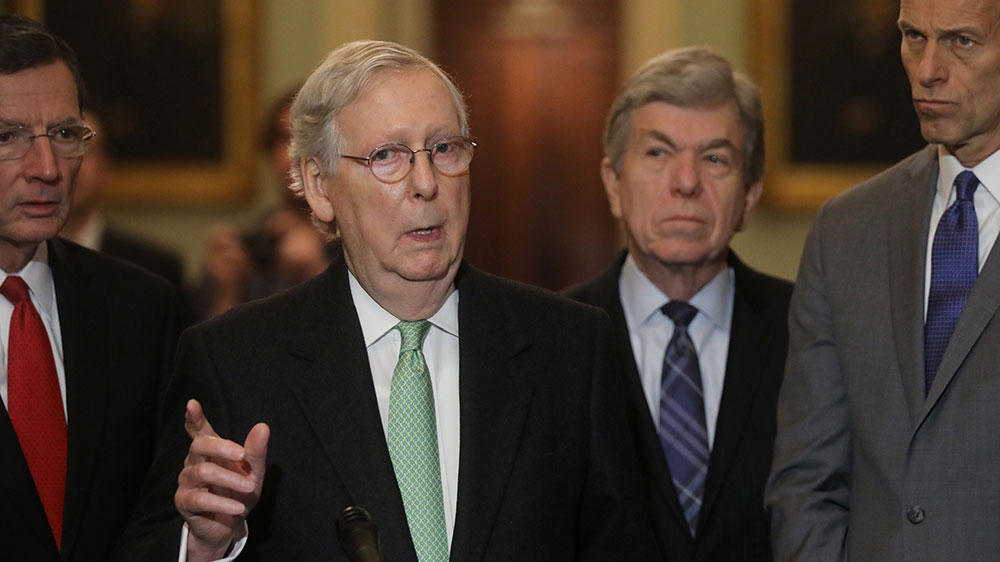 US Senate Majority Leader Mitch McConnell, flanked by Senator John Barrasso, Senator Roy Blunt and Senator John Thune holds his weekly news conference at the US Capitol in Washington [Jonathan Ernst/Reuters]
On Tuesday, McConnell appeared to reject the Democrats' request for new witnesses in the trial, saying the Senate would not "do House Democrats' homework for them" or go on a "fishing expedition" after the House impeachment process.
Senate Democratic leader Chuck Schumer has said he wants to hear from four additional witnesses, including acting White House Chief of Staff Mick Mulvaney and Trump's former National Security Adviser John Bolton.
McConnell said on Tuesday he hopes to meet Schumer soon to determine the next steps. He added that he is "optimistic" that Republicans and Democrats can agree on a "phase one" of the trial, which would include the presentation of the case and defence.
"We'll see at that point whether there are 51 members of the Senate who want to take one of two directions - either going in the direction of witnesses or going in the direction of voting on the articles of impeachment," McConnell was quoted by Reuters News Agency as saying. 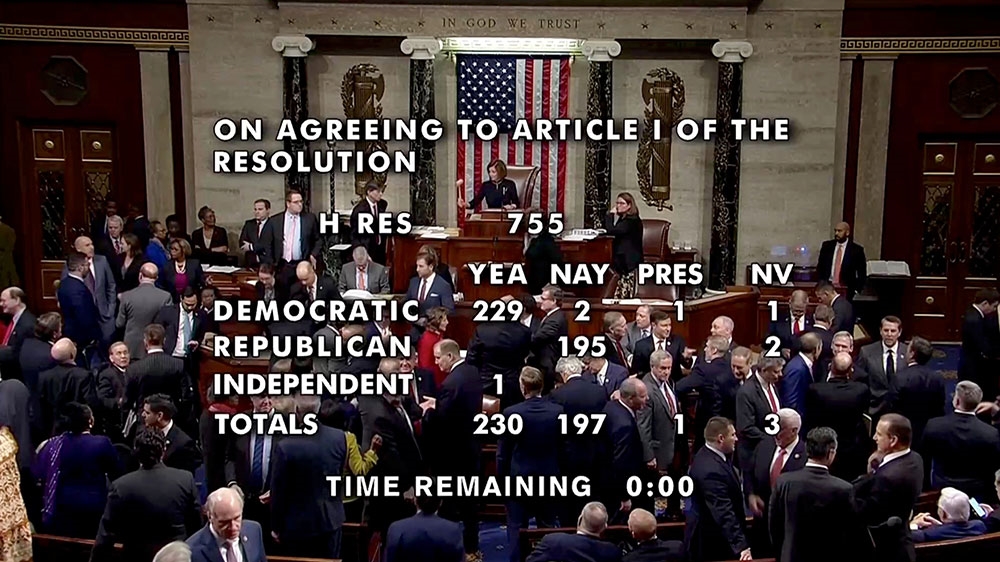 3. When will a Senate trial take place?

Once the Senate receives the articles of impeachment, a trial can begin.
No firm date for a Senate trial has been set, but McConnell has said it will be the chamber's "first order of business" upon returning to Washington, DC, in the new year.
Senate Democrats have proposed a trial plan that would see proceedings begin on January 6. Presentations by House managers, who would effectively work as prosecutors, would begin on January 9 under this plan. It is unlikely that Senate Republicans would agree to the Democrats' exact proposal.
McConnell is scheduled to address impeachment on the Senate floor on Thursday at 9:30am (14:30 GMT).

4. Who would become president if Trump was removed?

In the unlikely event that the Senate convicts and removes Trump from office, Vice President Mike Pence would become president and complete Trump's term, which ends on January 20, 2021.
Politics