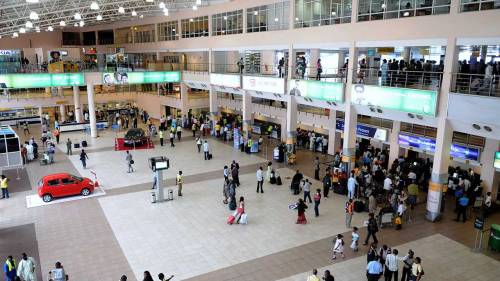 Most air passengers travelling from one airport to another have sorry tales this yuletide as high airfares and flight delays due to poor weather have disrupted their travel plans.


At most Nigerian airports, hundreds of passengers expressed sadness over what they termed “unprecedented hike” in airfares.
From Lagos to Abuja, Port Harcourt, Asaba, Benin, Akwa Ibom, Kano, Kaduna and several other airports across the country, the situation is the same.
For instance, a one-way ticket on Air Peace to Asaba Airport was as high as N70,000 for travellers buying across the counter at Lagos Airport, while flights to Port Harcourt was between N60,000 and N70,000 across the counters.
From Abuja Airport, a one-way ticket to Margret Ekpo International Airport was as high as N47,000, while Abuja to Port Harcourt was sold for N50,000.
Abuja-Lagos flight on one of the local airlines went as high as N60,000 on Thursday.
There was also an allegation of ticket hoarding by some staff of airlines at the counters.
It was gathered that these staff connived with some ‘protocol officers’ at airports especially at Lagos Airport to deny passengers tickets, only for them to sell it at exorbitant rates to desperate passengers through a third party.
One of the airline operators, who spoke to SaharaReporters on condition of anonymity on the issue, however, said that the high rush by passengers was responsible for the hike in fares.
He explained that the airfares would reduce to their usual rates after the holidays, stressing that it was expected in commercial aviation.
He said, “It’s like that in economics. High demands, will lead to increase in price. This is the season of the airline operators. Passengers travel more and definitely, the operators will put their aircraft to use more in this season.
“What is happening now is expected in commercial aviation. But in other climes, passengers buy their air tickets ahead because they plan. Some may have tickets as low as N20,000, while another passenger sitting beside him may hold N60,000.”
However, a stakeholder in the industry, Engr. Rotimi Adesanya, described the high fares as exploitation by airline operators.
Adesanya also attributed the lack of enough aircraft by the operators to the unpleasant situation.
Presently, there are less than 50 aircraft in operations by the nine indigenous airline operators.
Apart from the hike in fares, some of the flights are delayed due to poor weather at either departing or arriving point.
Besides, some of the flights are delayed for up to six hours due to “weather or mechanical problems".
Business News