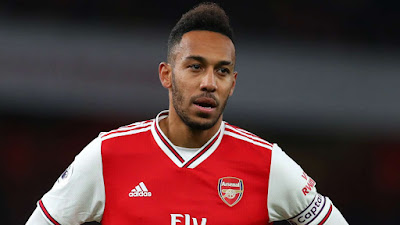 Gabriel Martinelli was halfway through his first day at Arsenal when he sat down in the canteen to eat his lunch.


The nervy teenager was on his own, trying to get his head around his new surroundings having left Brazil to pursue his dream of making his name in Europe.
He could barely understand a word that anyone in the room was saying. For someone so young, it was a difficult moment, but then Pierre-Emerick Aubameyang spotted him.
“I’m eating there, Aubameyang arrives and sits next to me, speaking Portuguese to me, trying to communicate,” said Martinelli.
“The guy is so good and humble. I was like: 'Man, Aubameyang, who I saw on the TV, came to talk to me!' He gave me a lot of support.”
It was a small gesture, but a good example of why Aubameyang was the stand-out choice to replace Granit Xhaka as captain once Unai Emery had decided to take the armband away from the midfielder following his ugly spat with the Arsenal fans.
Some have questioned the appointment, particularly as the Gabon international is stalling on a new contract at the Emirates.
His current deal expires in the summer of 2021 and despite talks over an extension, he has yet to commit to prolonging his stay in north London.
It is a worry, but it is not something that should stop him having the armband. With Aubameyang, the positives far outweigh the negatives.
The 30-year-old may be seen as a brash, extravagant character - someone who is not shy in showcasing his wealth with his flashy clothes and fleet of supercars.
But behind the scenes he is anything but. He is a charming, thoughtful and well liked figure - who has the full respect of his team-mates and the coaching staff.

“In the dressing room, he is not arrogant or extroverted,” former Arsenal head or recruitment Sven Mislintat told The Athletic, while discussing the strengths of a player he played a key role in signing from Borussia Dortmund.
“For me, without any doubt, he is one of the best professionals I ever worked with. He is a hard worker, a great athlete. He is always smiling.
“He is a quiet leader but he really is a leader.”
And it is those leadership qualities that make Aubameyang the natural successor to Xhaka.
The prolific frontman will lead Arsenal out for the first time as club captain on Saturday evening when they take on Leicester City at the King Power Stadium.
Having won just once in their last six games in all competitions, the Gunners find themselves firmly under the spotlight, with pressure growing on Emery by the week.
A defeat could leave Arsenal nine points adrift of the Champions League places going into the international break and it would see even more questions asked about whether Emery was the right man to take the club forward.
The Spaniard desperately needs a result and if he is to get one, Aubameyang will be key.
He may not be a leader in the mould of Tony Adams or Patrick Vieira, but the former Dortmund star leads by example with his performances.
Far too often in recent years, Arsenal have had a skipper who has not been a guaranteed starter, but in Aubameyang they now have a captain who - barring injury - will always be on the pitch.

He is vital to Emery’s team. Where others have struggled this season, he has continued to shine.
His goal against Wolves last weekend was his 50th since moving to north London in January 2018. It took him just 78 games to hit that landmark, with only seven players having done it faster in Arsenal's history.
He has scored nine goals in 13 matches this season, eight of which have come in the Premier League. When you consider Arsenal’s next highest scorer in the league this season has just two, it shows how important Aubameyang has been.
He’s indispensable on the pitch and he’s just as important off it. Regular visitors to London Colney will testify that wherever Aubameyang goes, he has a smile on his face.
“Auba is funny,” said Mislintat. “There is sunshine if he is around.”
Article continues below
It’s that infectious character that makes the striker such a key ingredient of Arsenal’s changing room. Even when the mood is dark - as it is now - he will lighten the atmosphere.
Stripping the captaincy off Xhaka will have been difficult for Emery. The Switzerland international topped the vote amongst his team-mates to take the armband this season and taking it off him so soon, risked alienating Arsenal’s head coach from his players.
But in handing it to Aubameyang, Emery averted any danger of mutiny. It was the sensible choice and one that he will hope pushes the striker to an even higher level than he has hit so far during his short stay at the Emirates.
Sports