Why is Nigeria failing? 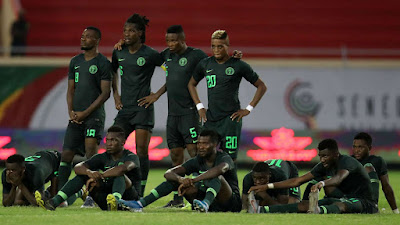 Minister of Sports and Youth Development, Sunday Dare met with the leadership of the Nigeria Football Federation (NFF) to question the country's recent failure in international competitions.


None of the country's football teams will participate at the Tokyo 2020 Olympic Games with both the Super Falcons and the U23 men's team failing to qualify.
The senior female team were knocked out during the qualifying round by Ivory Coast while the Olympic Eagles did not make it out of Group B at the Africa U23 Cup of Nations in Egypt.
Monday's meeting with the sports minister was reinforced by the Golden Eaglets' exit in the knockout stage of the 2019 Fifa U17 World Cup in Brazil and their loss in the qualifying rounds of the 2020 African Nations Championship.
The meeting had NFF President Amaju Pinnick, first Vice-President Barrister Seyi Akinwunmi, second Vice-President Shehu Dikko and General Secretary Mohammed Sanusi in attendance.
Article continues below
"Yesterday I led the Ministry of Youth and Sports in a meeting with the NFF. A single agenda meeting: to provide an explanation to the country as to why we suffered several failures recently - towards taking appropriate and far-reaching steps to improve Nigerian football," Dare tweeted.

Sunday Dare@SundayDareSD
Football :Yesterday I led the Ministry of Youth and Sports in a meeting with the NFF. A single agenda meeting: to provide an explanation to the country as to why we suffered several failures recently - towards taking appropriate and far reaching steps to improve Nigerian football
322
8:34 AM - Nov 19, 2019
Twitter Ads info and privacy

142 people are talking about this
Despite some of the teams' poor outings in tournaments, the Super Eagles kicked off their qualification campaign for the 2021 Africa Cup of Nations in Cameroon with back-to-back wins.
Victory over Benin and Lesotho moved the three-time African champions to the top of Group L.
Sports