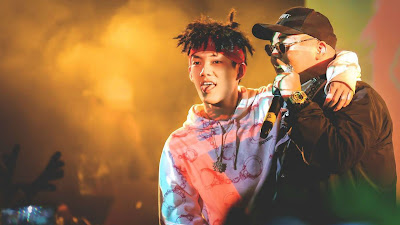 In 2015, Chinese hip-hop group Higher Brothers learned something the hard way: be very careful when your songs turn political.


The source of controversy was an anti-Uber song. “I don’t write political hip-hop,” spat out by the group’s rapper Melo. “But if any politicians try to shut me up, I’ll cut off their heads and lay them at their corpses’ feet. This time it’s Uber that’s investigated. Next time it will be you.” It led to the song being blocked by Chinese censors, and Melo called in for questioning by the local Public Security Bureau.
Since then, Higher Brothers have garnered widespread success both at home and abroad, partly thanks to landing their first American tour to promote their album Journey To The West. Alongside many of China’s rising crop of hip-hop artists, they’ve stormed onto both the local and global stage – and largely steered clear of politics.
Until now. Over the course of the summer, as the Hong Kong protests have unfolded, and as geopolitical climes have chilled both at home and abroad, many of China’s rappers have decided to voice their politics.
But in stark contrast to the longstanding tradition of counter-culturalism and racial protest that has defined American hip-hop, the politics these rappers are asserting has a distinctly, one-noted nationalist tone.
In response to the protests, Melo posted a picture of the Chinese national flag on his social media accounts with the caption: “Once again, I’m proud to be Chinese.” The rapper CD Rev released a diss track titled Hong Kong’s Fall. Jackson Wang, a Hong Kong-born artist, declared on Weibo that he was a “flag bearer determined to side with China”.
Reactions have been polarised. Wang was accused of being a traitor by pro-democracy activists, then given a supportive pat on the back by Chinese state media
In hip-hop parlance, the “cipher” refers to the circle of participants closing around a group of battling rappers flexing their own skills and challenging each other’s ideas to win over an audience. The cipher is about competition, but most crucially, it’s about identity, a chance for the rapper to express where they stand and what they believe in.
At a moment in history when identifying “Chinese-ness” has never been so vigorously contested – both on a global scale and in people’s personal lives – it is no surprise that China’s rappers are stepping into the cipher. In doing so, they are raising a very basic question about identity: What does it mean to be Chinese?
Once, it felt like there was a cacophony of rap voices cutting across different ideologies, geographies and socio-economic classes – creatively competing for the hearts and minds of young Chinese. Chengdu rappers, Chongqing rappers and Changsha rappers. Rappers from the coasts of Guangzhou and the highlands of Gansu. Glitzy, cosmopolitan tunes from Shanghai and scrappy, rural tempos of the Northeastern “hanmai”. Hong Kong rappers, such as Fotan Laiki and Doughboy, spitting rhymes about a hometown in flux. Diaspora rappers like Bohan Phoenix, singing from the cracks of China and the United States.
Today, the Chinese cipher seems to have ossified into binary themes – love and hate, anti-China vs pro-China, fervent nationalism vs treason to the nation – making it a zero-sum game in which conflict can only be resolved by the defeat of one side by the other. Artists like Wang, Melo and Vava, among so many others, seem have forgotten that the cipher is about competition, but also community, creativity and authenticity.
Instead of creating a unique sense of self and perspective, they have decided to toe the line, parroting the Chinese authorities’ message.

The Chinese cipher seems to have ossified into binary themes – love and hate, anti-China vs pro-China, fervent nationalism vs treason to the nation

This is not to say that all Chinese pride is uniformly expressed. Rapper GAI leading chants of Long Live the Motherland at the Spring Festival gala sponsored by state media is a very different brand of patriotism from the Higher Brothers’ breakout track Made In China. On one hand, the Higher Brothers’ song – about how Western products are now made in China – is indeed a bold assertion of Chinese pride. But the rappers are not boasting about China’s national sovereignty, replete with a red and yellow flag, but about the “jar of hot sauce so spicy that foreigners start to burn”.
The lyrics aren’t Mandarin, the language of national television, but Sichuanese, rich with rising and falling tones, which has great lyrical flow. Unlike the knee-jerk nationalism of Melo’s latest Instagram post, this playful, creative, hyperlocal pride is for the spicy food and free-wheeling attitude of its capital, Chengdu.
Two years ago, I visited Chengdu and sat in the studio of a group of young, aspiring rappers – TSP, from the outskirts of Sichuan; Rainbow and Skinnyoyo, from the flat, central grasslands of Xi’an and Shandong; Kong Kong, from the southern coast of Hong Kong; and Young13DBaby and Fendi Boi, from the northern mountains of Lhasa and Gansu.
As we sat together, shaking our heads to one of the group’s latest collaborations, I was struck by how smoothly they had woven together lyrics in Tibetan, Cantonese, Sichuanese, and Mandarin.
This scene of six boys, from six different regions of a nation of more than one billion, nodding their heads in unison to the beat of the music they had created together on their own, was the closest I have seen the Chinese cipher in its most platonic form – playful, inclusive, malleable – one song yielding the rich plurality of Chinese language and identity.
Hip-hop is a living, breathing culture – a reflection of the hopes and dreams of two generations of youth. Like those dreams, hip-hop music is supposed to be messy and full of contradictions. Can the Chinese hip-hop scene be a space where identities, even when contested, are not hardened in opposition to each other?
In an increasing polarised world, China’s hip-hop artists may find a new challenge – how to unite their audiences, instead of pushing them further apart.
Features