“What’s your business with what happens with consenting adults?” – Wole Soyinka discusses Homophobia in Nigeria

Turkish novelist and academic Elif Shafak sat down with Nobel laureate Wole Soyinka for an episode of Studio B: Unscripted, where the two brilliant minds discussed nationalism, safe spaces, and the role of a writer in the modern age.


Soyinka, characteristically, had a lot of insight and humour, sharing that writers are maybe masochists.
Early in the conversation, Shafak brought up the role of history, and how it’s constantly being revised through new lens. Soyinka, chipping in, discussed an old film he watched a long time ago, where a gay man was accepted in his society. He then fast forwarded to the future, and discussed the “anti-gay bill.”
Homosexuality is regarded as a sin now, he said, with no input from biology, human anatomy, hormones, or even human tendencies.
He talked about the bill’s criminalisation of “affection between two people of the same sex,” and asked, “What’s your business with what happens with consenting adults?”
Watch that short part below, and the full conversation on YouTube:

Studio B Unscripted@AJSBUnscripted
"You have politicians imposing their own newly acquired prejudices… You don't have enough problems of your own already?"

Wole Soyinka takes aim at homophobia in conversation with @Elif_Safak in Studio B. 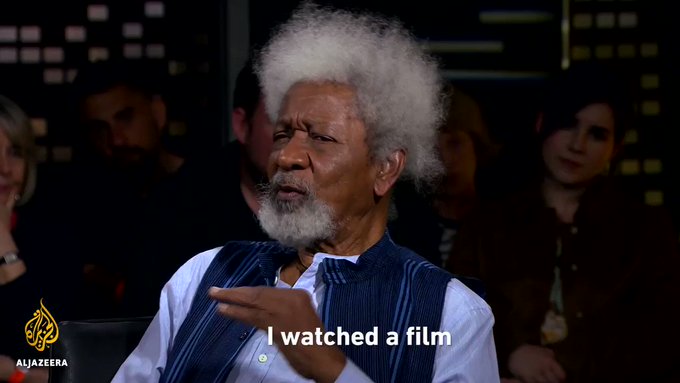 144 people are talking about this
Features