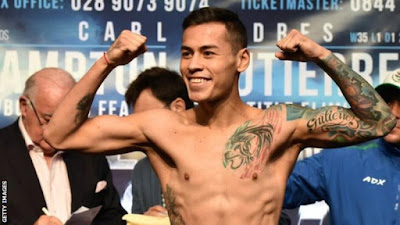 Gutierrez, who weighed 141 pounds, has been replaced by American Adam Lopez.
"This is absolutely a clear indication of a dangerous tactic by Gutierrez to cut weight," said WBC president Mauricio Sulaiman.


"This case will be fully investigated to its fullest consequences."
Sulaiman shared a tweet which showed Gutierrez had gained eight pounds in the past seven days.
Gutierrez would have also missed weight in the two divisions above super-featherweight.
Boxers occasionally miss weight but typically by amounts so small they can return to the scales within a couple of hours having worked off the excess.
Valdez, 28, said Gutierrez was "unprofessional", adding: "I trained hard for three months making the sacrifices, and I am very upset with him."
Event promoter Bob Arum said: "We're throwing him out of the hotel. I have seen guys two or three pounds over weight, that is still unprofessional, but to come in at 11 pounds overweight is a disgrace - I have never seen anything like it."
Former featherweight world champion Valdez's bout is the main event on a Las Vegas bill also featuring Northern Ireland's Carl Frampton.
Frampton, 32, faces unbeaten American Tyler McCreary in his first bout since losing an IBF world featherweight title challenge against England's Josh Warrington last December.
Sports