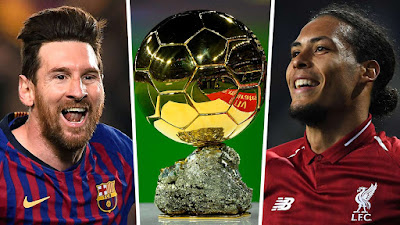 Virgil van Dijk is the “obvious” choice for the 2019 Ballon d’Or, says Danny Murphy, who considers the Liverpool defender to be more deserving of the prestigious prize than Barcelona superstar Lionel Messi.


The battle to be named the best player on the planet over the last 12 months looks set to be a two-horse race between a pair of talismanic figures at Anfield and Camp Nou.
Honours to this point have been shared, with Van Dijk taking the UEFA Player of the Year crown and Messi the FIFA Best award.
Murphy believes the Dutch defender should edge out the Argentine in the Golden Ball vote, with the arrival of the £75 million ($92m) centre-half on Merseyside having turned Liverpool into Champions League winners and Premier League title contenders.
The ex-Reds midfielder told talkSPORT: “For me, the winner is obvious: Virgil van Dijk.
“I believe that because of the massive impact he’s had on Liverpool Football Club.
“There are so many facets to him: his leadership qualities have grown, and his influence on others is probably the biggest reason.
“His impact on the performances of the players around him, especially the back four, is phenomenal.
“When you think of the full-backs, they’ve improved tremendously and that’s partly because of the security he gives them to go forward, knowing he’s so capable when other teams counterattack.
“Joel Matip has gone under the radar with his performances. He’s been sensational, and I think that’s because of the reassurance he has when he’s playing alongside Virgil. Joe Gomez was also improving massively until the injury setback he had.
“But the impact on others is fine as long as you’re playing well yourself, and Van Dijk’s performances have been sensational.
“Could Liverpool have won the Champions League without him? I think the answer is no.
“Of course, when you look at Mohamed Salah, Sadio Mane and Roberto Firmino, there are loads of big performers. But take Van Dijk out and I really don’t think Liverpool could’ve won it.”

Murphy can appreciate why many will be siding with Messi as he seeks to add a sixth Ballon d’Or to his collection, but he considers Van Dijk to have made a bigger impact at his club across 2019.
“Obviously, you’re dealing with the best players in the world and when you look at Lionel Messi’s goalscoring record, if he did win it over Van Dijk, you would have to understand why,” Murphy added.
Article continues below
“But his form didn’t help Barcelona win the Champions League. Usually (nine out of the last 12 years) the winner of the Ballon d’Or comes from the winner of the Champions League. The criteria is there and I don’t see why that should change.
“In terms of a defender winning it, there are some people who would say it’s easier to destroy than create and I understand that philosophy. But when you look at the impact on others and the way he gets others to perform around him, that’s a wonderful quality.
“The thing about Van Dijk that’s very unique is the fact that you can’t really replace what he brings. If you take out Mane, then Salah could easily win a game for you. Firmino could win a game for you. Divock Origi scored in the final. There are other attacking options.”
Sports