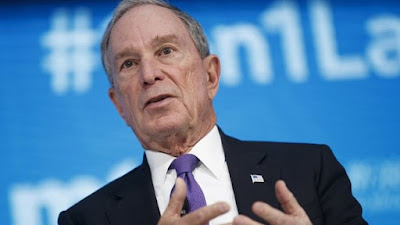 The ex-New York City mayor is concerned the current field of candidates is not good enough to beat Donald Trump in the 2020 election, an adviser says.


The 77-year-old is expected to file paperwork on Friday for the Democratic presidential primary in Alabama.
However, he has not yet made a decision on whether to run, advisers add.
If Mr Bloomberg does get on the ballot in Alabama, he will still have to register in other states which have later filing deadlines.
State-by-state votes, known as primaries and caucuses, will be held from February next year to pick a Democratic White House nominee.
The eventual winner will be crowned at the party convention in Wisconsin in July. He or she is expected to face President Trump, a Republican, in the general election in November.
A total of 17 Democratic candidates are vying to be the party's standard-bearer.
Former Vice-President Joe Biden, Massachusetts Senator Elizabeth Warren and Vermont Senator Bernie Sanders are the front-runners.
At a campaign fundraiser in Boston on Thursday, Mr Biden did not address Mr Bloomberg's potential candidacy.
Ms Warren welcomed Mr Bloomberg to the race on Twitter, linking to her own campaign website and suggesting the former mayor take a look for potential policy plans.
In a more pointed response, seemingly directed at Mr Bloomberg, Mr Sanders wrote on Twitter: "The billionaire class is scared and they should be scared."
Some recent opinion polls have suggested that Ms Warren and Mr Sanders - who are more politically liberal than Mr Biden - might face an uphill battle against Mr Trump.

What did Bloomberg's adviser say?

In a statement, Howard Wolfson said: "We now need to finish the job and ensure that Trump is defeated.
"But Mike is increasingly concerned that the current field of candidates is not well positioned to do that.
"Based on his record of accomplishment, leadership and his ability to bring people together to drive change, Mike would be able to take the fight to Trump and win," Mr Wolfson said.
But his advisers also acknowledge that Mr Bloomberg's belated entry to the race could present challenges in states like Iowa and New Hampshire, where other Democratic contenders have been campaigning for months.
The Bloomberg team are reportedly planning to focus on the so-called Super Tuesday contests in March, when 14 states, including California, Alabama and Colorado, will vote on a single day for their preferred White House nominee.
If he enters the race, Mr Bloomberg will face intense scrutiny of his three-term mayoral record in New York.
While in office, he defended the New York Police Department's use of the controversial stop-and-frisk policy, similar to stop-and-search in the UK, which critics say disproportionately targets African Americans and Hispanics. Black voters are a vital constituency for Democrats.
Speaking to reporters on Friday, President Trump said Mr Bloomberg "will fail" if he joins the Democratic race.
Candidates who want to get on the Democratic primary ballot in Alabama must submit the necessary paperwork by Friday.
New Hampshire's filing deadline is next week, on 15 November.

A New York billionaire as president?

So far this is only a single toe entering the water, but it's a significant one. The presence of the former New York mayor and multi-billionaire would set alight the race for the Democratic Party nomination.
The politician closest to Mr Bloomberg's centrist outlook is Joe Biden - but his campaign appears to be fading.
Mr Bloomberg has, I understand, been doing a lot of polling in early voting states like Iowa and New Hampshire.
This isn't the first time that he's eyed a run at the presidency, only to eventually decide against.
But in the past he's ruled himself out because he thought Americans wouldn't vote for a billionaire New York businessman. That concern no longer applies.

Who is Michael Bloomberg?

Mr Bloomberg's net worth is $52bn (£40bn), according to Forbes. This is nearly 17 times more than that of Mr Trump ($3.1bn).
Mr Bloomberg was a Wall Street banker who went on to found the financial publishing empire that bears his name.
A philanthropist, he has donated millions of dollars to educational, medical and other causes.
Originally a Democrat, he became a Republican to mount a successful campaign for mayor of New York City in 2001.
He went on to serve three terms as mayor until 2012, rejoining the Democratic Party only last year.
Regarded as a moderate Democrat, he has highlighted climate change as a key issue, but he had appeared to dismiss a potential run for the presidency earlier this year.
Mr Bloomberg is a large financial backer of gun-control advocacy group Everytown for Gun Safety, which he helped found in 2014.
The group, and Mr Bloomberg, were seen as playing a major role in a sweeping victory for Democrats in Virginia state elections earlier this week.
They vastly outspent gun lobby group the National Rifle Association - which is based in Virginia - by pumping $2.5m into the state race.
Politics