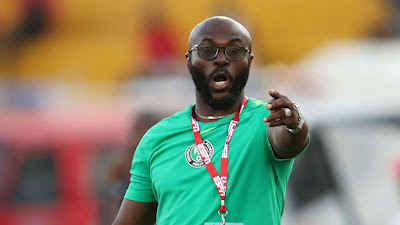 Nigeria coach Imama Amapakabo believes his side can progress beyond the group stage of the 2019 Africa U23 Cup of Nations in Egypt.


The Olympic Eagles will take on Zambia in their second Group B game in the competition at Al Salam Stadium on Tuesday evening.
Although the West Africans lost their opening game to Cote d’Ivoire, Amapakabo believed his side can still nick a place in the last four of the tournament.
“All teams are equal in this tournament,” Amapakabo said in a pre-match press conference.
“We know what we have to do after losing the first match. Two games remain to be won to keep in the competition. We lost nothing yet.”
Meanwhile, Nigeria forward Ibrahim Sunusi has promised his side will give their best against the Zambians in order to revive their hopes of progressing to the next stage of the tournament.
“We are going to prepare ourselves well for Zambia. In the field, we will give everything and the rest belongs to God," he said.
Article continues below
Nigeria are the reigning champions, having defeated Algeria in the final of the 2015 edition in Senegal.
Sports