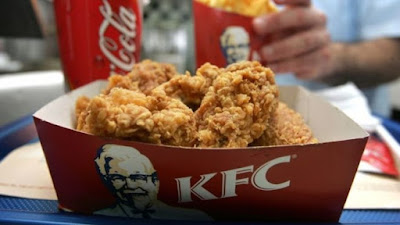 The video shows a man kneeling and presenting a ring to his partner halfway through their fried chicken.


KFC South Africa shared the video and asked for help in finding the couple.
The post was retweeted more than 17,000 times, and the hashtag #KFCProposal started trending.
The couple were soon identified as Bhut' Hector and Nonhlanhla.
But it didn't end there.
Soon strangers started offering to help plan the big day, including accommodation for their honeymoon and performances at the ceremony.
"I want to offer my performance at the wedding for free... I love love," tweeted popular singer-songwriter Zakes Bantwini.
Then companies started throwing in gifts.
"These honeymoon destinations look far. Someone needs to drive them there. We got you," tweeted South Africa's official Audi account.
"We would love to make their union even more special by offering them a two-page spread in our magazine so they can tell their beautiful love story!" tweeted DRUM magazine.
Offers of everything from beer to cooking pots to sportswear streamed in on Friday, along with thousands of pounds worth of donations.
Kateka Malobola, a passer-by who filmed the proposal and uploaded it to social media, spoke of his glee following the huge reaction from South Africans.
"I took the video and sent it to a group that I've got on my WhatsApp to say 'check this out!' and I put it on Facebook and put it on Instagram, and then boom!" he said in a follow-up video.
The love-birds thanked all their well-wishers in a statement to SowetanLIVE.E.
The couple also told the website that they had originally married in 2012, but the groom wasn't satisfied with the rings he bought at the time and wanted to buy his wife something better.
"I don't work so I didn't have enough cash to give wife Nonhlanhla a befitting wedding/jewellery but wanted to do something small," Hector said.
"Thank you South Africa. Your kindness has truly warmed us. We would have never imagined that our love story would have touched so many of you," the couple added.
Features