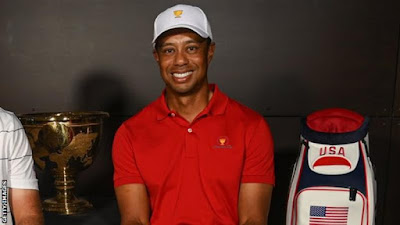 He is only the second playing captain in the event between the US and an international team - Hale Irwin played in the inaugural matches 25 years ago.


Since returning in early 2018 from a fourth operation on his back, Woods has won three tournaments, including his 15th major at the Masters in April.
Woods, 43, also selected Tony Finau, Gary Woodland and Patrick Reed.
"As captain, I'm going to choose Tiger Woods as the last player on the team," he said, in announcing his own selection, before reeling off his Ryder Cup and Presidents Cup record.
"And I find it interesting talking in the third person," he joked.
In October, Woods equalled the PGA Tour record with his 82nd career victory at the Zozo Championship in Japan.
Woods is also the first captain to pick himself for the Presidents Cup - Irwin qualified automatically for the event, which pits the US against a rest of the world team minus Europe, as one of the top eight-ranked US players at the time.
The rest of the US team is Dustin Johnson, Xander Schauffele, Bryson DeChambeau, Justin Thomas, Matt Kuchar, Patrick Cantlay and Webb Simpson.
There is room for one more player, who will be current world number one Brooks Koepka, if he recovers from a knee injury in time.
The competition takes place between 9 and 15 December in Melbourne.
Sports