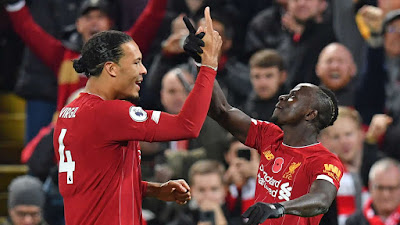 The big game got the big performance required. And for Liverpool, the biggest of three points, and the biggest step towards ending that long wait for a Premier League title.


Jurgen Klopp would have dreamt it like this last night. His team had been asked the question, could they deliver when the lights shone bright? Could they stare down Manchester City, the champions, the record-breakers, the treble winners?
They could.
The Reds’ 3-1 win takes them nine points clear of Pep Guardiola’s side, who once more found Anfield a hurdle they just couldn’t clear. City, the great City, had no answers. They remain fourth in the table. Leicester and Chelsea, for now, are Liverpool's nearest challengers. Even those two are eight points adrift.
For once, this was a Super Sunday worthy of the name, as two of the world’s finest teams went toe-to-toe. If last season’s fixture was a tight, conservative affair, this was anything but. At times, it was a joy to watch. "A nice one, huh?" said Klopp afterwards.
It certainly was if you were of a Liverpool persuasion. Their 11th league win of the season was by far their best, a triumph of grit, aggression and clinical finishing. The concentration levsl shown, from start to finish, were astounding.
Klopp had urged everyone, including the hot-dog sellers, to play their part in making City’s life as uncomfortable as possible.
He got his wish.
His fans were noisy, his team were wired. Anfield crackled, it booed and it roared. Liverpool’s players responded.

They struggled for five minutes but they were ahead inside six. Fabinho, rested at Aston Villa with this game in mind, produced the fireworks, firing a 25-yard rocket past Claudio Bravo. Could the stand-in City goalkeeper have done better? It was some hit from the Brazilian, some time for him to grab only his second goal for the club, too.
City claimed a handball against Trent Alexander-Arnold at the other end. Referee Michael Oliver said no, VAR agreed. "Thank you so, so much," Guardiola told the match officials at the final whistle. Sarcasm is one of the Catalan's staples.
Fabinho, meanwhile, has established himself as one of Klopp’s big players, and another of them would deliver the second telling blow of the afternoon.
Mohamed Salah’s recent form has been a little sketchy in truth. The ankle injury sustained against Leicester a month ago has been nagging him. At Villa a week ago, he was substituted with his team behind. Unthinkable in the past.
But Anfield? That’s his castle. That’s his home. And 13 minutes in, he wrote his name all over another Liverpool performance.
It was some goal too, a spray from Alexander-Arnold allowing Andy Robertson to gallop forward. Robertson’s cross was perfect, Salah’s run was perfect. His header, on the move, gave Bravo no chance.

That’s 38 goals in just 44 Anfield appearances in the Premier League for Salah, a remarkable record. He may not quite be smashing in the numbers of that incredible, record-toppling first season on Merseyside, but he’s no less important to Klopp and his team. This was a big goal in a big game. His ankle troubled him once more, but he stayed on and kept City honest. He's a great player, and he has a great mentality to go with it.
Liverpool had scored with their first two shots of the first half, and they netted with their first effort of the second period too. This time it was Jordan Henderson with the buffet ball, and Sadio Mane with the headed finish, eight minutes after the break. The right kind of dive, this one. The irony will not have been lost on the Senegal star, who has 11 for the season now, and has scored 22 times at Anfield since the start of last season.
Liverpool retreated after going 3-0 up, pushed back by City’s possession play. It was tense and nervy at times, but Guardiola’s side had only Bernardo Silva’s well-taken strike to show for their efforts. They ended the game rattled, angered and annoyed by the referee, by the crowd, by the opponents.
Article continues below
"One of the most proud performances of my career," said Guardiola in his post-match press conference. "We showed why we are champions."
Maybe they did, but Liverpool showed that the crown is slipping. It's only November, and nothing is won or lost at this stage, but this was a seismic win for Klopp and his team.
The New Kings? On this evidence, they just might be.
Sports