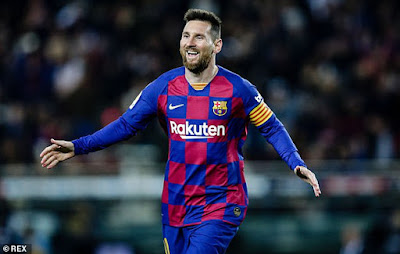 Lionel Messi is the star player of the current generation and the greatest footballer ever, according to Manchester City and Germany midfielder Ilkay Gundogan.


The Barcelona great is a five-time Ballon d'Or winner, like Cristiano Ronaldo, and is widely regarded as one of the best players ever.
Messi and Ronaldo are once again in the Ballon d'Or conversation, alongside the likes of Virgil van Dijk, who helped guide Liverpool to the Champions League title last campaign.
While the debate around Messi and Ronaldo is ongoing and has been for nearly an entire decade, Gundogan has no doubt the Argentina forward is the greatest he has seen play the game.
"Lionel Messi [is the best player in the world]," he said.
"In my opinion, he has very special abilities. He has talent and he always manages to show it on the pitch. He always has the instinct to make the right decision.
"He uses his speed well against the opponents he plays. He has a strong finish. All in all, no one else has as much quality as Lionel Messi.
"He is the star player of my generation and the greatest footballer of all time. I hope we get to watch him play for a few more years."
Messi has continued to star for Barcelona this season, scoring nine goals in 11 games in all competitions.
The Argentine's latest effort, a hat-trick, took him to the 40-goal mark in a calendar year for the 11th successive year.
That is despite overcoming persistent injury issues which kept him sidelined over the first couple of months of the current La Liga season.
Barcelona currently lead La Liga, although they are level on points with rivals Real Madrid through the first 12 matches of the campaign.
The Catalan side will face Leganes following the international break ahead of a Champions League clash with Borussia Dortmund shortly after.
Messi and co. lead their group with eight points through four matches, with Dortmund sitting just behind on seven points while Inter have earned four.
Sports