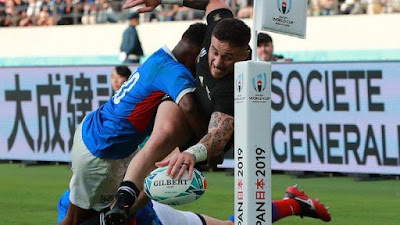 The first tournament in Asia featured a breakthrough performance from the hosts, a devastating typhoon, superb supporters and, in South Africa, worthy champions who look to unite a troubled nation.


Here are our unforgettable moments from an enthralling six weeks.

Kamaishi, a city reborn after the devastating tsunami in 2011, unexpectedly hosted one of the matches of the tournament. Uruguay had won only two World Cup matches in their history prior to their clash with Fiji, the last one 16 years ago.
With just 22 professional players, the South Americans upset the odds spectacularly with a 30-27 victory. The final whistle brought tears of happiness and huge celebration for the Uruguayans.

One of the great unknowns about Japan 2019 was how the host team would perform.
The omens were not good when they suffered a 41-7 drubbing at the hands of eventual champions South Africa in a warm-up match. But after a nervous start they overcame Russia 30-10 and then lit up the tournament with an incredible 19-12 upset of Ireland, roared on by a passionate and partisan crowd.
A stylish win over Scotland saw them top their pool but they fell short in the quarter-finals against the Springboks, who squeezed the life out of them with a gargantuan defensive effort.
But they won plenty of new admirers with their entertaining brand of attacking rugby.

Wearing the colours on your chest

World Rugby took the tournament to Japan to find new fans in Asia, but no-one could be sure of the reception in a country in love with football and baseball.
They need not have worried. Fans embraced the tournament more than even the most optimistic of organisers could have hoped.
They packed out the stadiums - even a dreary Italy-Namibia match in the pouring rain was played in front of full stands - as the Japanese adopted other teams, complete with replica shirts and singing the anthems.
But one fan took it to another level.
Hiroshi Moriyama, more commonly known as Bak-san, decided to paint his torso in the colours of all 20 participating teams, earning him celebrity status.

All Black flair at its best

There were 285 tries scored in Japan but TJ Perenara's acrobatic finish in the corner after a dazzling bit of trickery from team-mate Brad Weber was the pick of the bunch.
This was how BBC journalist Alex Bysouth described it in our live text coverage:
Weber's audacious no-look pass drew audible gasps from the Tokyo Stadium crowd and fans exchanged stunned looks as Perenara's incredible, scarcely believable finish was scrutinised on the big screen by match officials.
"It was a special one. It even got me out of my seat, and not too many things do that," said All Blacks head coach Steve Hansen.
Wales' Josh Adams finished as the tournament's top try-scorer with seven from seven matches, one try more than South Africa's Makazole Mapimpi (six matches) and two more than Japan's Kotaro Matsushima (five matches).

For the first time at a Rugby World Cup, matches were cancelled as Typhoon Hagibis battered the country, resulting in at least 80 deaths.
The storm, one of the biggest and most powerful Japan has seen in years, hit Tokyo on 12 October, but volunteers and tournament staff worked through the night to put on the crunch Japan-Scotland match in Yokohama the next day.
The hosts beat Scotland to qualify for their first appearance at the knockout stages on an emotionally charged evening.
The Japanese national anthem was sung with true sentiment as players and fans shed tears for those who lost their lives.

Christian Lealiifano's Australia were knocked out by England at the quarter-final stage, but after the game the fly-half shared a tender moment with his son.
The 31-year-old, who only returned to the side in July after a battle with leukaemia, was reduced to tears as he embraced his child.
This was just one of many emotional photos as players celebrated or commiserated with their families at the end of matches.

The opening weekend of the tournament saw an unusual number of refereeing errors, especially around the new high-tackle protocol, which sparked a rare rebuke from World Rugby.
Standards improved but South African referee Jaco Peyper caused embarrassment when he was pictured with some Welsh fans pretending to elbow them in the face.
The images, which went viral on social media, sparked outrage in France, as Peyper had just hours earlier sent off lock Sebastien Vahaamahina for a blatant elbow that changed the course of their quarter-final and sent Les Bleus home.
Peyper was given a dressing down from World Rugby and was dropped from the panel for the semi-finals.
In total, there were eight red cards shown at the 2019 World Cup, twice as many as any other edition of the tournament.

At 5ft 7in, South Africa's Faf de Klerk is one of the smallest international players, but the Sale scrum-half plays like a "mini Hercules".
The fiery Springbok squared up to Wales' man-mountain Jake Ball during their semi-final, with a cheeky smile as if to further antagonise the lock.
"We're great friends. It was just a nice moment between us," joked De Klerk afterwards.
After winning the World Cup, the scrum-half became an internet sensation, being snapped wearing only a pair of Springbok 'budgie smugglers' to greet Prince Harry as the champions celebrated in their dressing room.

England managed to disrupt New Zealand in every facet of the game during their stunning semi-final victory - and it started with the haka.
England's players lined up in a V formation to receive the spine-tingling challenge, with captain Owen Farrell seemingly smiling during the All Blacks' performance.
"We didn't just want to stand in a flat line and let them come at us," he said.
England scored a try within two minutes, eventually winning 19-7.

Every team in the competition bowed to all four sides of each stadium, adopting a slice of Japanese culture during the tournament.
Warren Gatland's final game as Wales head coach ended in defeat by the All Blacks in the bronze-medal match, but the 56-year-old has put "respect" back into the national shirt during his 12 years in charge, winning three Grand Slams and reaching two World Cup semi-finals.
All Blacks head coach Steve Hansen and captain Kieran Read also said emotional farewells at the end of the match, after World Cup wins in 2011 and 2015.
Ireland head coach Joe Schmidt and captain Rory Best made their exits after Ireland's quarter-final defeat by New Zealand.

Siya Kolisi became the first black Springbok captain to lift the Webb Ellis Cup after South Africa dominated England in the final.
There is social and economic unrest in the Rainbow Nation and Kolisi's first thoughts after winning were to call for unity in South Africa.
"We have so many problems in our country but a team like this - we come from different backgrounds, different races - we came together with one goal and we wanted to achieve it," he said.
"I really hope we've done that for South Africa. It just shows that we can pull together if we want to achieve something."
A fitting end to a quite spectacular tournament.
Sports