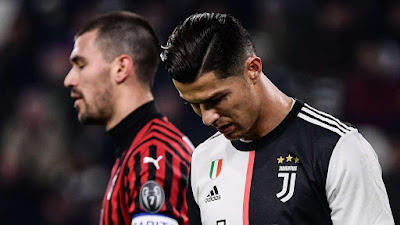 After seeing Cristiano Ronaldo substituted for a second straight game, Fabio Capello has claimed the Juventus star "hasn't dribbled past anyone for three years".


The 34-year-old was replaced by Paulo Dybala in the 55th minute against AC Milan on Sunday having failed to have much of an impact on a game the Argentine substitute would win for Juve in the 77th minute.
Following his substitution, Ronaldo went straight up the tunnel and reportedly left the stadium before full-time.
Capello, a former player and manager of Juventus, wasn't impressed with the Portugal attacker's reaction to being replaced and questioned his general ability with the ball at his feet.
"I didn't like this, it wasn't nice," Capello told Sky Sport Italia. "He must be a champion even when he comes off the pitch.
"The truth is that Cristiano Ronaldo hasn't dribbled [past] an opponent for three years. I did the La Liga commentary when he usually took the double step and left you there.
"Inside him is a super-champion, the best of all, but now there is Dybala and Douglas Costa, who made two sensational goals. Dybala in excellent condition can make the difference, as can Douglas Costa.
"They win games without Ronaldo. Juve seemed dependent on him, instead the great squad and the quality of the players helps them win anyway.
"Bravo Sarri, who had the courage to take him off, it takes personality, especially thinking that all the players in the squad can play and make a difference.
"Cristiano did it for a while, but now it's not him and he must recover  - especially on a physical level. He does not have the speed and dynamism he has shown at other times."
Article continues below
Speaking after the game, Juventus coach Maurizio Sarri praised Ronaldo for playing through injury and wasn't concerned about how he reacted to being replaced.
“We must thank Ronaldo, because he made a sacrifice to be there at all tonight in a difficult situation," Sarri said.
"He did everything possible to play, but I saw he was not well and thought it best to take him off. It’s only natural a player is going to be irritated to leave the pitch, especially when he worked so hard to be there."
Sports