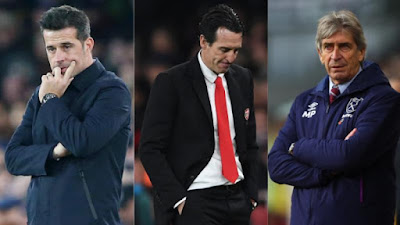 Ex-Hull City and Watford boss Silva is fighting to save his job after his side fell to a 2-0 home defeat by struggling Norwich City on Saturday.


Speaking on BBC Radio 5 Live, Sutton said: "Under Silva, Everton are in a race to the bottom, not the top."
He added: "There has been no improvement under him."
Silva is not the only manager in potential danger, with Arsenal's Unai Emery and West Ham's Manuel Pellegrini also coming under increasing scrutiny. The trio are currently the top three favourites for the sack among bookmakers.

Everton 'could be in relegation scrap'

Form: A dismal defeat at Goodison Park over the weekend leaves Silva's side 15th and four points above the relegation places with over a third of the season gone. The Toffees, who finished eighth following a strong finish last season, have lost six of their last nine league matches and kept one clean sheet in their last 11.
Fixtures: Everton now face a daunting run of fixtures as they travel to high-flying Leicester City on Sunday before facing leaders Liverpool, Chelsea, Manchester United, Leicester again in the quarter-final of the League Cup, and Arsenal before Christmas.
The odds: Silva is currently the outright favourite to be the next Premier League manager sacked. Ex-Everton boss David Moyes is the favourite to replace him, ahead of Bournemouth's Eddie Howe and Manchester City assistant coach Mikel Arteta - who also happens to be a former Toffees player.
Sutton's verdict: "Silva was brought in to take Everton to the next level, a European place. There has been no improvement under him.
"He has had a lot of money to spend but it's been like running in quicksand. It's not going to get any better. The one thing he can't complain about is he's had the money to spend, he's brought players in and he's had time to mould his side.
"It's the manner of the loss at the weekend. It was Sam Allardyce football - desperate stuff. I can understand the Everton fans who are saying we have had enough and if you carry on we could really be in a relegation scrap."
The damning stat: Since the start of last season, Everton have failed to win a single Premier League game in which they've fallen behind.

Form: Arsenal extended their winless league run to five games against Southampton on Saturday - but it could have been worse had Alexandre Lacazette not popped up with a late equaliser in a 2-2 draw. Since back-to-back victories at the start of the season, the Gunners have won only two of 11 league games and already lie eight points adrift of the Champions League places. Their six-game winless run in all competitions is their longest since 1998.
Fixtures: Bottom-half sides Norwich, Brighton and West Ham offer opportunities for Emery to turn the tide, before champions Manchester City arrive at the Emirates on 15 December. Festive trips to Everton and Bournemouth follow.
The odds: Emery, midway through his second season in charge, is currently second-favourite to be the next Premier League manager to lose his job, after Silva. Wolves boss Nuno Espirito Santo is ahead of Manchester City assistant Arteta and former Juventus coach Massimiliano Allegri in the list of frontrunners to replace the Spaniard, while Rafael Benitez, who left Newcastle in the summer, and former player Freddie Ljungberg are also believed to be in the running.
Sutton's verdict: "I do fear for Unai Emery. They gave Arsene Wenger 20 years. Emery probably won't get 20 months in charge.
"It's all unravelled. Southampton, a struggling team, carved Arsenal open. I just cannot see him lasting off the back of that. It's not going to get any better. It's just going to get worse. The knives aren't out - the claymores are out for him. They really have turned."
On the availability of former Tottenham manager Mauricio Pochettino: "I don't see the big issue with it. If Emery does go, then why not go after the most sought-after manager out there. Arsenal need building again from the bottom. Did Pochettino do that at Tottenham? Absolutely. So why not?"
The damning stat: This is Arsenal's lowest points tally after 13 league games since the 1983-84 campaign.

Form: Despite attempting a late fightback, West Ham suffered a third successive Premier League reverse - a fifth in their last six - in their 3-2 defeat by Tottenham at the weekend. Pellegrini's side, winless in their last seven in the Premier League, have taken just two points from a possible 21 to sink to 16th in the standings.
Fixtures: The Hammers face five of the current top eight in their next seven fixtures, with Chelsea, Wolves and Arsenal up next. Top two Liverpool and Leicester both visit London Stadium before the end of 2019.
The odds: Pellegrini is not far behind Silva and Emery in the minds of the bookmakers. Former Newcastle boss Benitez and current Bournemouth manager Howe are thought to lead the running to replace Pellegrini, with former Brighton boss Chris Hughton and Charlton's Lee Bowyer also being mentioned.
Sutton's verdict: "They're in big trouble. They started the season so well but they are a team so low on confidence."
The damning stat: The Hammers have conceded at least three goals in three consecutive Premier League games for the first time since a run of four matches under Slaven Bilic in September 2016.
Sports