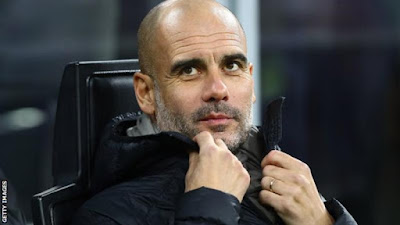 The 48-year-old Spaniard was appointed in 2016 and signed a contract extension last year until 2021.


No talks have yet been held with City chiefs, but Guardiola said: "I'm so comfortable working with this club.
"When you are [somewhere for] five years it depends on the results. We will see what happens this season and next season."
Guardiola spent four years in charge at Barcelona, winning La Liga three times and the Champions League twice.
He left the Catalan giants in the summer of 2012 and after a short sabbatical began a three-year spell at Bayern Munich in 2013, winning the Bundesliga in each of his three seasons in Germany.
Having won the Premier League for the past two seasons, plus the FA Cup and two League Cups, Guardiola said of staying on: "I'm open [to it], yes. It is not about what the club wants or not. For me, I want to see my players and the reaction of my players and everything.
"It is not as simple as I want to extend. I want to see the club, I want to see the players, I want to see how we are still working together.
"That is the most important thing after five years together. You have to feel like we can do it together and enjoy to work together."

Guardiola would not oppose Arteta move

Meanwhile, Guardiola said he would not object to assistant Mikel Arteta taking the Arsenal manager's job should the Gunners decide to turn to their former player to succeed Unai Emery, who was dismissed on Friday morning.
Another ex-Arsenal midfielder, Freddie Ljungberg, has been placed in temporary charge but Spaniard Arteta, 37, who ended his career in north London with a five-year spell at the club, has been touted for the permanent position.
Arteta, who was linked with replacing Arsene Wenger at the Emirates in 2018 before Emery was appointed, joined the City coaching staff in July 2016 after retiring as a player.
He has also been mentioned in regard to another of his former clubs, Everton, with their manager Marco Silva's future under scrutiny.
"I said many times with my players, staff, they're free to do what they want to do," Guardiola said.
"With Mikel it's about being a friend. I want the best for him. What I want is we stay together this season and next season, but I don't know what's the best for him."
Sports