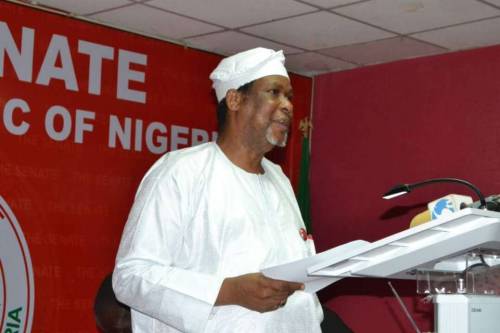 Recall that the Senate Deputy Chief Whip, Sabi Abdullahi, had introduced the bill on the floor of the Senate on November 12.
Abdullahi had proposed the establishment of the National Commission for the Prohibition of Hate Speech, which will also handle offenders.
According to the bill, anybody, who commits an offence deemed as hate speech, will be liable to life imprisonment.
Where the act causes any loss of life, the person shall also be punished with death by hanging, the bill proposed.
Reacting to the development, Tofowomo described the bill as a "duplication of existing law for Nigerians".
He noted that the objectives of the new bill have already been addressed by the Cybercrime Act 2015 signed into law by former President Goodluck Jonathan.
The lawmaker stated that Nigerians should feel free to air their views and opinions on the bill.
He said, "The Cybercrime Act which was signed into law by former President Goodluck Jonathan has addressed Internet usage and safety with regards to prevention, prohibition, combating cybercrimes. It also prescribes the punishment cybercrime offenders should face in Nigeria.
”The Nigerian constitution which also guaranteed freedom of expression as a fundamental right also made relevant provisions for the restrictions and derogation from such rights.
"So, the objectives of this new bill have already been addressed by both the constitution of the Federal Republic of Nigeria and the Cybercrime Act 2015.
”I, therefore enjoin Nigerians to follow the due process by attending the public hearing of the Senate Committee on Judiciary, Human Rights and Legal Matters to present their petitions and air their views in the appropriate place where their voices could be heard instead of complaining on social media.”
On his part, Senator Boroffice said there was no cause for public anxiety over the bill.
He noted that the bill cannot take away the inalienable rights being enjoyed by citizens of the country under section 39 of Nigeria's constitution.
He said, "The fundamental right enriched in section 39 of the constitution of the Federal Republic is sacred and sacrosanct. No bill can overthrow it.
"The bill will go through public hearing and Nigerians will decide. No cause for anxiety."
Politics