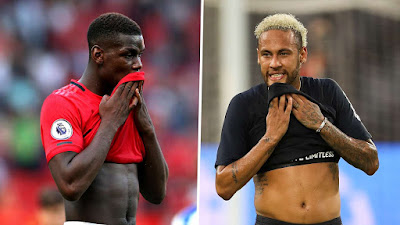 Superstar football duo Neymar and Paul Pogba have both missed out on this year's Goal 50.


Neymar had featured in every list of the world's top male players since 2011, even finishing as high as fourth in 2015 after helping Barcelona win the treble.
However, after two further top 10 finishes in the colours of the Catalans, the Brazilian slipped down the standings at the end of an injury-hit first year at Paris Saint-Germain, finishing 24th.
Neymar has missed out completely this year, having once again been beset by fitness issues which prevented him from representing his country at the 2019 Copa America, which the Selecao won without him.
While Pogba hasn't been plagued by injuries to the same extent, the France international has had just as difficult a time of it over the past 12 months.
After being at loggerheads with former Manchester United boss Jose Mourinho for the majority of the first half of the 2018-19 season, the midfielder enjoyed a brief resurgence under new boss Ole Gunnar Solskjaer before losing his form.
Indeed, while Pogba made the Professional Footballers' Association team of the year, his inclusion bemused many given the Frenchman's inability to help his side finish in the Premier League's top four.
Accusations of perceived indifference appeared to be substantiated when Pogba – who featured in every Goal 50 between 2013 and 2018 – spoke at the end of the season of wanting to leave Old Trafford for "a new challenge".
However, despite interest from Real Madrid, a transfer never materialised, just like a desired return to Barcelona never happened for Neymar.

As a result, both players are now facing uphill challenges to get the fans at their respective clubs back onside, as well as re-establish themselves among the game’s elite.
The Goal 50 is an annual award that brings together the world's 50 best male and female players.
Article continues below
The players are divided into two 25-strong groups split by gender – for the first time – and ranked on their achievements over the previous year.
Chief editors and correspondents from Goal's 42 editions around the world cast their votes based on each candidate's consistency, big-game performances, footballing legacy and success at club and international level.
Will it be Lionel Messi or Cristiano Ronaldo again? Or one of Liverpool’s Champions League heroes, such as Mohamed Salah, Sadio Mane or Alisson? Find out on Tuesday November 12!
Sports