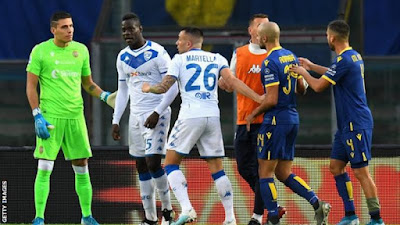 The striker, 29, kicked the ball into the crowd and threatened to walk off the pitch after being abused in Sunday's 2-1 defeat at Verona.


"We have no doubts Balotelli is to all intents Italian - even a Bresciano," read a statement from Brescia ultras.
"But the arrogance that he continually gives off is unjustifiable."
On Tuesday, Serie A's disciplinary commission ordered the closure of Verona's Poltrone Est stand for one game, as punishment.
That came after the club banned Luca Castellini, the head of their ultras fan group, for 11 years for stating the ex-Manchester City and Liverpool striker can "never be completely Italian".
The statement from Brescia ultras added: "The personal declarations of one of the leaders of the Verona Curva cannot justify the witch-hunt sparked by the media and institutions in yet another attempt to criminalise and destroy the entire ultras world.
"This does not mean that certain chants are legitimate or acceptable, but nor are all Verona fans racists and the Verona Curva some sort of KKK [Klu Klux Klan] coven.
"Entire fanbases cannot be considered racist, but racism does exist and it is often used to create mass panic in public opinion. This unconventional language is used more and more by public and political figures, but of course nobody would think of banning them because of some code of ethics."
Sports