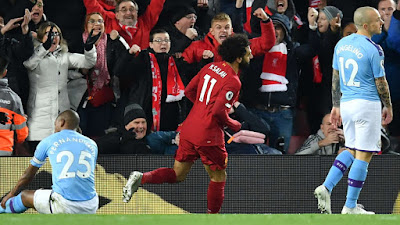 How Manchester City could have done with Vincent Kompany on the pitch rather than offering expert advice from a TV studio.


Or Aymeric Laporte at centre-back rather than in the stands acting as a cheerleader.
Or how they would now have left Ederson sitting on his couch watching the midweek Champions League game at Atalanta rather than suffering a thigh strain in San Siro.
Three big players who could maybe have stopped a good performance becoming a disastrous afternoon on Sunday.
City are now nine points behind leaders Liverpool at the top of the Premier League and hopes of a third successive title have taken a sizeable dent after a 3-1 defeat.
And a wait for just a second win at Anfield since 1981 continues.
But how they would have settled for the dour goalless draw that they left Merseyside with 13 months ago.
That was a game of few chances when City were defensively solid but resulted in a point that could have been key to Pep Guardiola’s side winning the title.
This time at Anfield they went on the attack but it left their defence exposed to Liverpool’s formidable front three.

Controversy surrounded Liverpool’s opener in the sixth minute. City were furious a penalty wasn't awarded when the ball struck Trent Alexander-Arnold’s arm in the area but, just 22 seconds later, the ball was in the back of their own net.
Liverpool broke at pace and the visitors couldn’t stop them.
Angelino, surprisingly starting just his second Premier League game, ahead of Benjamin Mendy for tactical reasons, weakly prodded away a clearance. Fabinho lashed in a brilliant 25-yard strike just inside Claudio Bravo’s post but the Chilean couldn't even get a fingertip to it.
Seven minutes later they were undone again. Fernandinho failed to cut out Andrew Robertson’s cross, Angelino lost Mohamed Salah and the Egyptian finished in style.
Shortly after the break, Kyle Walker lost Sadio Mane and Bravo could only flap his header into the net.
There had been missed chances, with Sergio Aguero and Raheem Sterling forcing Alisson into saves and Angelino hitting the post. But City worked hard to carve out their opportunities whereas Liverpool didn’t have to do too much to create goal-scoring chances.
Bernardo Silva finally scored as City pushed forward but the damage had been done, not just in the game but to title ambitions.
Ederson could be back as soon as after the international break, but Laporte’s recovery from a knee ligament injury will not be complete until January at the earliest.

Injuries came at just the wrong time but that doesn’t excuse that the champions are short of cover in the centre of defence.
The decision to go in to the season with just Laporte, John Stones and Nicolas Otamendi has backfired. Otamendi has been in poor form this season and was left out at Anfield with emergency defender Fernandinho preferred.
But the experiment of playing the Brazilian in the back four hasn’t come off, particularly when facing the quality of Roberto Firmino.
Article continues below
City badly needed someone with the experience and calming influence of Kompany at the heart of their defence. The Belgian’s persistent injuries finally proved too much and he left for his first coaching role in the summer.
The decision not to replace him, though, has proved expensive. They wanted Harry Maguire before his move to Manchester United but wouldn’t meet Leicester’s asking price and that penny-pinching has proved costly.
Guardiola has said so far that he has no plans to go into the transfer market when the January window opens. He may change his mind but Liverpool could be out of sight by then.
Sports