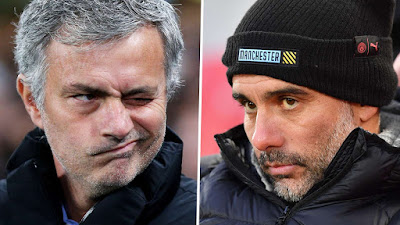 Jose Mourinho thinks his old adversary Pep Guardiola got his tactics wrong in Manchester City’s 3-1 defeat at Liverpool on Sunday.


Goals from Fabinho, Mohamed Salah and Sadio Mane meant Bernardo Silva’s late consolation goal counted for nothing as Liverpool stretched their lead at the top of the Premier League to eight points – and nine over fourth-placed City.
While Liverpool weren’t at their rampant best, City’s makeshift defence never looked confident, and Mourinho thought they were set up all wrong.
“Let’s forget the last time I played here, because the last time I played here, I lost 3-1 and I was sacked,” he admitted on Sky Sports.
“But apart from that one, every time I’ve played against Liverpool and I had a team that was not as good as Liverpool, I was always concerned about the distances between my four defenders.
“When a team plays like they do, with [Roberto] Firmino dropping in between the lines and creating doubts, and when Salah and Mane want to go in between the gaps, you have to play more than ever with a very short distance between your four defenders.
“Liverpool scored two goals. One between [Kyle] Walker and [John] Stones, and one between Fernandinho and Angelino. I cannot say more than that.”
When asked if he thought the goals City conceded were avoidable, Mourinho simply said: “For me, yes. It’s very difficult. It’s very difficult, but you have to try.”

While City weren’t at full strength due to the injuries to Ederson and Aymeric Laporte, plus Benjamin Mendy’s gradual return to full fitness after a long-term injury, Guardiola left Nicolas Otamendi and Joao Cancelo on the bench throughout the 90 minutes.
The match was also notable for some quiet performances from City’s attackers.
While Jurgen Klopp eventually opted to bring on a second right-back in Joe Gomez to nullify the constant threat posed by Raheem Sterling, the likes of Sergio Aguero and Kevin De Bruyne were nowhere near their best.
Article continues below
“When De Bruyne plays as a midfielder on the right, I think he has much more of a connection with the attacking players,” Mourinho added.
“In the last section of the game, I think Bernardo was a lot more in the game than he could have been during the 90 minutes. It’s very difficult to play against this Liverpool.”
Mourinho had said before the game that he believed if Liverpool won on Sunday, they would go on to win the league title – a prediction he reiterated after full-time.
Sports