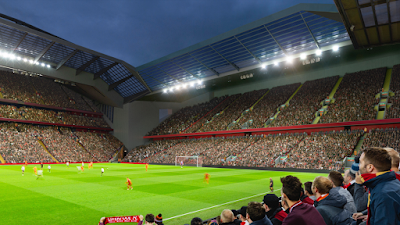 Liverpool have unveiled ambitious plans to increase Anfield’s capacity beyond 60,000.


The £60 million expansion would see around 7,000 seats added to the Anfield Road End of the stadium, with the club hoping to submit a formal planning application as early as spring 2020.
Goal confirmed earlier this month that the Anfield Road redevelopment was set to take a step forward with local residents and businesses invited to a series of public consultation events, which will take place over the next week.
And now Liverpool have released the first images of the proposal, which would take the stadium’s total capacity to around 61,000.
"Our ambition is to allow more fans to enjoy some of the best football in the world," said Andy Hughes, Liverpool’s chief financial officer.
"We have always been looking at a long-term development plan for Anfield and we have been looking specifically at Anfield Road as the next step."
Liverpool announced in August that they had scrapped initial plans for an upgrading of the Anfield Road End. Outline planning permission for the addition of around 4,000 extra seats, which was first applied for in 2014, was allowed to lapse with club owners, Fenway Sports Group, believing the design to be insufficient.
The new proposal would see 7,000 seats added, the majority of which would be general admission. Plans for extra hospitality facilities, as well as an indoor fan-park, are also included.
Significantly, the redevelopment would mean the Kop, Anfield’s most famous stand, becomes its smallest. Currently, the Kop holds around 12,400 fans, but it will be dwarfed by the new Anfield Road stand, which would house up to 16,000.

Hughes added: "I am biased but I believe Anfield is one of the best footballing experiences in the world, so I really believe the decision to stay [and redevelop] was the right one.
"It respects the history of the club, it is a special place with its own special atmosphere and we are trying to respect that as part of this development, while also delivering some new, modern facilities for the fans and the players.
"I think we are trying to get the best of both worlds through this development and long-term plan."
The proposed redevelopment would see a stretch of Anfield Road, between Skerries Road and 96 Avenue, closed permanently, while Liverpool are also exploring the opportunity for permanent permission to hold concerts and other major events at Anfield, including other sporting events such as Gaelic games and American Football.
Opposition from some quarters is anticipated, with residents and business owners expressing concerns over issues such as traffic, light and noise.
Ian Byrne, who will be Labour’s parliamentary candidate for West Derby in the forthcoming General Election, has campaigned for a new train link to Anfield, which would help alleviate traffic issues around the stadium on matchdays. At present, the nearest rail station is at Sandhills, one-and-a-half miles away.
Liverpool intend to hold a second consultation period in the New Year, after which their plans are expected to be finalised and a full planning application submitted.
"I think there are very clearly three hurdles and they are all really important," said Hughes. "It is all aspects of consultation with the local community, residents, local businesses, community groups.
"Then getting through the planning process is equally important, and creating a financially sustainable model for the stand is equally important. Without any of those in place a build will not go ahead."

Hughes confirmed that Fenway Sports Group would look to borrow the money for the redevelopment from the club’s existing lenders.
"We have had incredible support from our ownership group and that support has been around taking good football and business decisions for the club," he said.
"Money is not free. We will be borrowing money to finance this stand.
"Our plan is still to be finalised but to use our existing banking facilities, our revolving credit facility. We are in the process of finalising that at the moment, but it will be financed locally."
Article continues below
Hughes added: "The club financially is in significantly stronger shape. We have seen consistently strong revenue growth since FSG took over. We have gone from some heavy losses through to a breakeven period through to a profitable period, so we have seen improvement throughout the club, on and off the pitch, in all aspects of our operations and commercial activity.
"So yes, we are in a much stronger place and the fact we can finance this locally within our revolving credit facility demonstrates that."
Hughes would not be drawn on the idea of freezing or reducing ticket prices for the new stand, saying only: "Our ticketing strategy will come later. We need to get through several hurdles first before we get to that stage. We are trying lots of things to improve local affordability of tickets and access."
Sports