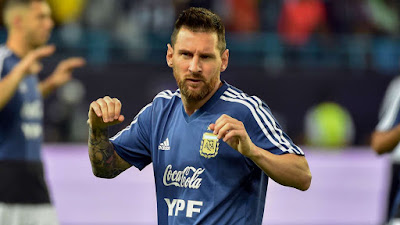 Brazil head coach Tite said he was told to shut up by Argentina captain Lionel Messi in the friendly clash between the South American rivals.


Messi returned from a three-month international ban to lead Argentina past Brazil 1-0 thanks to his 13th-minute goal in Riyadh on Friday.
Argentina star Messi missed Argentina's previous four matches due to a suspension for accusing CONMEBOL of favouring hosts Brazil – who won their semi-final meeting – at the Copa America and he was in the thick of the action against Tite's Selecao.
Messi and Tite exchanged words in the opening half, with the Barcelona superstar seen putting his fingers to his lips as the Brazil boss complained to the referee.
"I complained because he [Messi] should have been shown a yellow card and he told me to shut my mouth and I told him to shut his mouth," Tite said. "And that was it."
Tite added: "I don't want to answer anymore on it. You need a strong referee because he'll swallow you… It should have been a card, I was right to complain."
Messi's goal condemned Brazil – who have struggled since lifting the Copa America trophy – to their fifth consecutive match without victory.
The Selecao did have the opportunity to take the lead in the 10th minute but Gabriel Jesus fired the penalty wide in the 10th minute.
Extraordinarily, Argentina were awarded their own spot-kick a short time after which Messi took and was blocked by Alisson.
But the rebound fell kindly to the Argentine talisman, who dispatched it clinically into the back of the net.
Article continues below
Messi then went close to a second in rather more characteristic fashion, as he dribbled from inside his own half and got a shot away from the edge of the box, but his effort was a little tame and Alisson stopped it easily.
The second half was significantly untidier, though Argentina still looked more threatening, with Messi's long-range free-kick forcing Alisson to tip it over.
Lautaro Martinez should have wrapped things up 10 minutes from time when he blazed over inside the area, though Brazil – who handed Rodrygo Goes and Wesley debuts from the bench – were unable to punish the let-off and Argentina claimed victory.
Sports