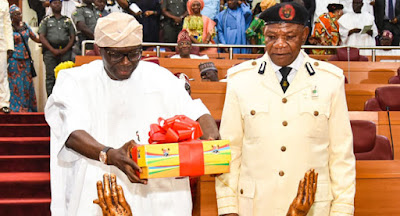 Governor Babajide Sanwo-Olu gave the indication while presenting a budget proposal of N1.168 trillion for the 2020 fiscal year to members of the State House of Assembly on Friday.


He explained that his administration has tripled the funds earmarked to address the recurrent challenges of flooding in the state.
“In response to the perennial challenges of flooding in the metropolis, we have to triple the capital budget provision to tackle these observed problems from N3 billion in 2019 to N9 billion in 2020.
“We are embarking on massive desilting of major drain systems across the state next year,” the governor was quoted as saying in a statement by his Chief Press Secretary, Gboyega Akosile.
He also unveiled the plan to accelerate the growth of the state’s economy by proposing aggressive investments in critical areas of priorities – physical infrastructure, environment, human capital, and security.
READ ALSO: Presidency Confirms Sack Of Osinbajo’s Aides, Gives Reasons
According to Governor Sanwo-Olu, the 2020 budget will be funded from a projected Internally Generated Revenue (IGR) of N1.071 trillion while a budget deficit of N97.53 billion will be financed through internal and external loans.
Besides, he disclosed that the fiscal proposal also included a provision for the new minimum wage.
A breakdown of the budget tagged “Awakening to a Greater Lagos”, revealed that 62 per cent, representing N723.75 billion of total spending was earmarked for capital expenditure while recurrent expenditure will take N444.81 billion, representing 38 per cent.
Further analysis shows that about N167.81 billion of the recurrent expenditure will go for personnel costs and other staff-related expenses, representing 22.02 per cent of the total revenue.
The governor noted that this was within the acceptable wage policy which benchmarked 25 per cent staff overheads in the budget.
He was hopeful that the proposed budget would help the state achieve a sustainable social investment and scale up private sector-led economic growth through investment in infrastructure and security.
Governor Sanwo-Olu added that the budget would improve civic engagement in governance and foster partnership with the Federal Government and the civil society.
He noted that Lagos had been facing combined threats from population explosion and climate change, stressing that his administration would earmark huge funds to the environment and public infrastructure.
“Lagos faces an existential threat, arising from the interplay of demographic and climate change. Lagos will continue to be a magnet for multitudes within and outside Nigeria, in search of jobs and economic prosperity.
“These levels of migration put a phenomenal strain on the physical and fiscal resources of the state,” the governor said.
He added, “This budget seeks to aggressively invest in and develop our education, health, and other physical infrastructure sectors.
“As of September 2019, our capital expenditure on works and infrastructure was just N31 billion, which is less compared with N78 billion proposed in the current year. It is our intention to spend N115 billion on physical infrastructure in 2020.”
In his remarks, the Speaker of the House, Mudashiru Obasa, praised the governor for accepting the responsibility to tackle the challenges in the state.
He believes Governor Sanwo-Olu’s activities since his assumption of office have re-assured residents of his zeal to fix the inherited problems.
Obasa promised that the Assembly would ensure the speedy passage of the budget and make it a “New Year” gift for the people.
Business Politics