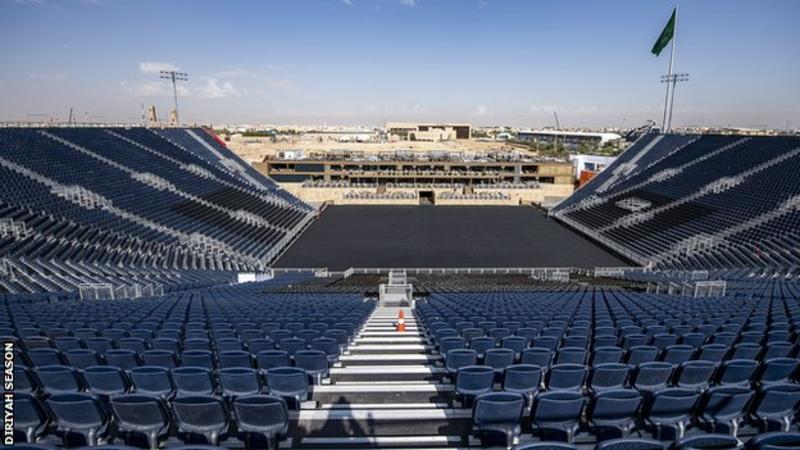 Work on the 15,000-seat Diriyah Arena only began two months before the fight, which is on 7 December.


Briton Joshua is seeking to regain the WBA, IBF and WBO heavyweight titles after June's shock defeat by Ruiz in New York.
"The arena and site are utterly breathtaking. We can't wait," said promoter Eddie Hearn.
Joshua visited the venue after landing in Saudi Arabia on Saturday.
The Diriyah Arena was built by 175 staff and incorporates 295 tonnes of steel. It will take a month to deconstruct after the bout, with 95% of the material being reused to stage other events.
Saudi Arabia was chosen to host the match ahead of rival proposals from Cardiff's Principality Stadium and Dubai. The country hosted British boxer Amir Khan's win over Billy Dib in July and Callum Smith's success over George Groves in the World Boxing Super Series final in September 2018.
The bout has attracted criticism with human rights organisation Amnesty International highlighting the country's "abysmal" human rights record. Heavy restrictions on freedom of expression and women's rights have been raised, as has the use of the death penalty for offences not recognised as crimes under international law.
Saudi Arabia has sought to stage sporting and entertainment events in a bid to attract visitors and move away from its oil-dependent economy.
Sports