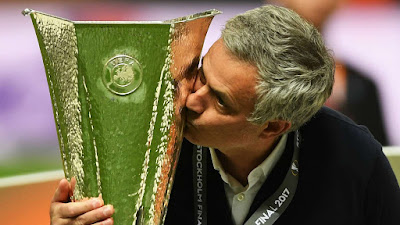 Jose Mourinho will bring trophies to Tottenham and will likely have a significant transfer budget to be able to do so, according to former Spurs stars Jamie Redknapp and Jamie O’Hara.


The former Manchester United and Chelsea boss made a dramatic return to English football on Wednesday morning, signing a three-and-a-half year deal to become Spurs head coach less than 12 hours after his predecessor Mauricio Pochettino was sacked.
The 56-year-old is one of the most successful coaches in world football, having won 25 major honours during his career, including three Premier League titles with Chelsea and the Champions League with both Porto and Inter.
Though Pochettino established Spurs as a regular Champions League side, he failed to win a major honour during his time in north London, and the club have not won a trophy of any description since the 2008 League Cup.
Redknapp believes the desire to end that trophy drought was the driving force behind chairman Daniel Levy’s decision to turn to Mourinho.
"Champions League aside, Spurs have been in decline for some time,” Redknapp told the Daily Mail. “They have been falling short in the league since the end of last season and are 14th, way below what is expected.
“Poch failed to win a trophy in his five years - and that will work against any coach when it comes to being given time.
“Jose Mourinho is a left-field appointment for Levy but if you want a winner - and Spurs have not won a trophy for a long time – Mourinho is your man.”
O’Hara agrees with that sentiment and feels Mourinho’s appointment could signal a change of transfer strategy from Levy, who does not usually grant his managers huge sums to spend on new players.
And, if Mourinho is able to spend in the transfer market, former midfielder O’Hara thinks it won’t be long before Spurs are challenging for the Premier League.
“I think it is a fantastic appointment,” he told Sky Sports. “You have to be sad for Poch because of what he has done and were we have been. We’ve been a Champions League outfit for a long time now with him.
“They are thinking big. If you are going to sack one of the best managers Tottenham have ever had, who do you bring in? You bring in another manager who is probably one of the greatest managers around, an incredible signing.
“What he does is he wins trophies and that’s what Spurs want. It’s alright being Champions League, Champions League, Champions League, but the Spurs fans, we want trophies and he will bring that.
Article continues below
“It says to me that Daniel Levy has said to him ‘you can spend money’. January is coming, the summer is coming. He is not going to come into a football club where he’s not going to have a big budget.
“So I think you will see a lot of new faces, a fresh team, a new start. If the players are on board, they are on board. If not, Jose Mourinho will say ‘thanks, see you later’.
“I guarantee in the next year or so we will be challenging for the title.”
Sports