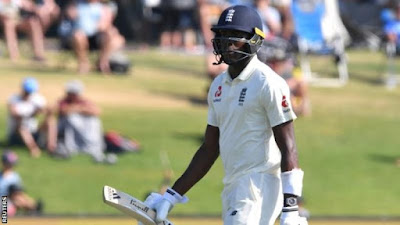 Archer, 24, said he heard comments from "one guy" during the tourists' heavy defeat at the Bay Oval.


New Zealand Cricket (NZC) said it would apologise to Archer but has yet to identify the perpetrator.
"It's against everything that we as Kiwis are about," Williamson said.
Speaking to stuff.co.nz, the 29-year-old added: "I certainly hope nothing like that ever happens again.
"I can only apologise on behalf of Kiwis to Jofra, not only from our team and how we look to conduct ourselves, but what we expect of Kiwis in general."
When asked if he would personally apologise to Archer, Williamson, who grew up close to the Bay Oval, said: "I will try, over the next few days if I can see him, definitely.
"It's a horrific thing. In a country and a setting where it is very much multi-cultural, it's something we need to put to bed quickly."
The England and Wales Cricket Board said it is conducting an investigation into the incident, which took place as Archer walked off the field following his dismissal.
"It's emotional, it hurts and we fully support Jofra," said director of men's cricket Ashley Giles. "He is a young man making his way in the game and we don't need that sort of distraction.
"Hopefully we find out who it is. There is a lot of CCTV around the ground. We are hoping someone there can identify person and we are working hard to find the culprit.
"We are working closely with New Zealand Cricket. They are incredibly concerned it happened on their patch and believe it is an isolated incident."
As part of the investigation, England said Archer had received a direct message via social media from someone who is alleged to be the culprit.
The second Test of the two-match series on Thursday in Hamilton (22:00 GMT).
Sports