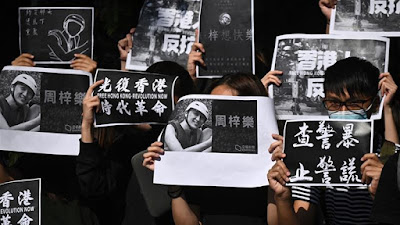 A student of a Hong Kong university who fell during protests at the weekend died early on Friday morning, hospital authorities said, setting the stage for a fresh wave of demonstrations in the self-governing territory in the coming weekend.


The Hong Kong University of Science and Technology students' union said the man was a 22-year-old surnamed Chow who was a two-year undergraduate in the computer science department. In some reports, he was identified as Alex Chow and Chow Tsz-lok.
The South China Morning Post reported that he died of cardiac arrest after being in a coma since early Monday morning.
Chow's case has been embraced by the protest movement, which has called for city-wide vigils in his honour.
The student was believed to have fallen in the early hours of Monday in the New Territories district of Tseung Kwan O, while police were trying to disperse the protesters with rounds of tear gas.
Chow was later found lying unconscious in a pool of blood inside a car park that police had fired tear gas into after protesters hurled objects from the building.
Protesters claimed that by firing the tear gas, police also delayed the deployment of emergency medical services to the victim.
Police officials acknowledge that tear gas had been used to disperse protesters near the car park, but say there was only a small amount of gas in the air when emergency responders found Chow.The precise circumstances of how Chow came to be injured are unclear but he has been embraced by the five-month-old protest movement.

LO Kin-hei 羅健熙 ✔@lokinhei
Alex Chow, the HKUST student fell from a carpark 4 days ago, is gone. He was just 22 yo, and had a bright long future ahead of him. https://twitter.com/lokinhei/status/1191124938561687552 …
LO Kin-hei 羅健熙 ✔@lokinhei
Woke up to another terrible news that a teenage fell in a carpark and seriously injured at Tseung Kwan O, while he was running away from tear gas last night. He was unconscious when paramedic treated him.

794 people are talking about this
Al Jazeera's Sarah Clarke reporting from Hong Kong said that the protesters are blaming police, saying they had failed to adhere to tear gas guidelines.  Clarke added that as Friday also marks as a day of graduation for a number of students at the University of Hong Kong's science and technology campus, students have joined a memorial to paid tribute to the 22-year-old."The university has... asked for students and these protesters to show restraint, to show peace and to avoid conflict but at the moment the protesters have marched up and are now vandalising and graffitiing some of the operations on this campus that are affiliated with the mainland Chinese companies," Clarke said.
In a social media post, pro-democracy leader Joshua Wong said Hong Kong residents "mourn the loss of the freedom fighter in HK."
"We will not leave anyone behind - what we start together, we finish together. Given the losses suffered by HK society in the past month, the gov must pay the price."

Meanwhile, China slammed protesters, calling them as "mobsters", after a pro-Beijing legislator was injured in a stabbing.
In the latest incident, a man holding a bouquet approached pro-Beijing legislator Junius Ho on Wednesday morning as the politician was campaigning in his constituency near the border with China.
The attack was "not only a serious criminal act but also pure election violence," Xu Luying, spokeswoman for the Hong Kong and Macau Affairs Office of China's central government, said on Thursday, according to the official Xinhua news agency.
Xu said protesters in Hong Kong "intend to create a 'chilling effect' by threatening and intimidating their candidates and their supporters", in order to "affect the election results of the district councils and realise their purpose of seizing political power".
Xu also called for "strong punishment" against violence in Hong Kong and for a "fair, just, safe and orderly environment" for the district elections, set to be held on November 24.
The international finance hub has been shaken by five months of huge and increasingly violent protests calling for greater democratic freedoms and police accountability.
With Beijing and Hong Kong's unpopular leader Carrie Lam refusing to offer a political solution to the protesters' grievances, violence has spiralled on both sides of the ideological divide.
In October, Wong, the pro-democracy leader, was barred from contesting a seat in the upcoming polls.
An election officer had ruled that the concept of self-determination advocated by Wong's party, Demosisto, contradicted the Basic Law, Hong Kong's mini-constitution. 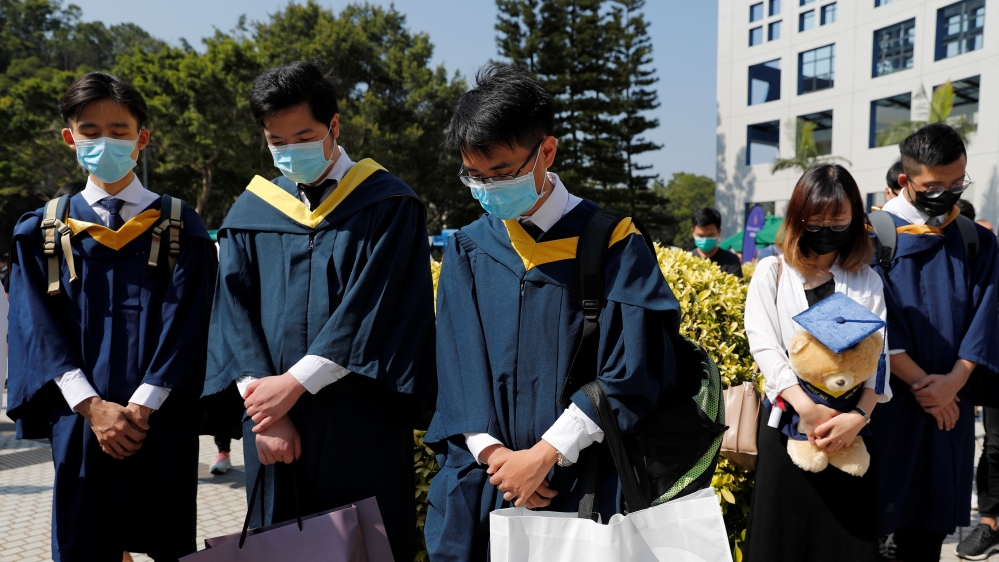 Students attend a ceremony to pay tribute to Chow Tsz-lok, 22, a university student who fell during protests at the weekend and died early on Friday morning [Tyrone Siu/Reuters]
News