Henderson reveals he was ‘ready to kill’ disrespectful Suarez at Liverpool 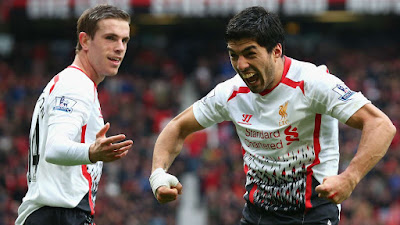 Jordan Henderson admits he was “ready to kill” Luis Suarez shortly after his arrival at Liverpool, with the Uruguayan considered to have been disrespectful on the training field.


The South American striker was acquired by the Reds during the January transfer window of 2011.
Six months later and Henderson joined him at Anfield after making a big-money move from Sunderland.
At just 20 years of age, the now Liverpool captain says he was not given the warmest of welcomes by Suarez as he was left feeling “not good enough” by senior colleagues.
Henderson, who has gone on to become a Champions League-winning skipper on Merseyside, told The Greatest Game with Jamie Carragher podcast of his early experiences: “I was trying to do the best I can do.
“Being a footballer, there is criticism and people doubting you all the time.
“At that time, I was a young player and there were one or two things Luis did in training that I didn’t like.
“It made me feel I wasn’t good enough to be in the same team in training.
“The arms were up like ‘what the f*ck, what is he doing’, like I shouldn’t be there.
“That really hurt me. He did it three times and then I exploded and I was ready to kill him.”

Henderson endured a tough start to his time with Liverpool and came close to leaving for Fulham after just a year with the club.
He was, however, to knuckle down and prove his worth in time and now has over 330 appearances to his name.
Many of those came alongside Suarez, with the pair ironing out their differences to become key components in a side which came agonisingly close to tasting Premier League title glory under Brendan Rodgers.
Article continues below
Henderson added on his relationship with a fiery frontman that got off to a frosty start: “From that point, I had a good relationship with Luis. The next game I set him up for his goal.
“He was brilliant with me after that and I was really close to him after that and he was another big player I learned from.”
Suarez left Liverpool for Barcelona in 2014, but Jurgen Klopp has rebuilt the Reds over recent years and has them back in title contention as they seek to bring a 30-year wait for top-flight glory to a close.
Sports