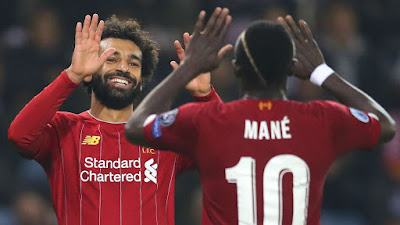 The Reds stars are contenders to be named the world's best player in 2019 after winning the Champions League and finishing second in the Premier League.


However, they face competition from five-time winners Cristiano Ronaldo and Lionel Messi, while Manchester City stars Sergio Aguero and Raheem Sterling are also in the running.
But Real Madrid attacker Hazard believes the award should be given to one of Jurgen Klopp's charges, highlighting Mane for his displays for Africa Cup of Nations finalists Senegal.
"I'll give it to a Liverpool player," he told Le Parisien. "Mane, Salah or Van Dijk deserve it.
"If Sadio had won the Africa Cup of Nations with Senegal, there would have been no debate.
"It would be nice if he had it. Or Momo, who is a friend of mine. It would be good for African football and for English football."

Ex-Chelsea star Hazard has long been seen as a potential Ballon d'Or winner and is among the 30 nominees for this year's edition, the winner of which will be announced on December 2.
The award has never been won by a Belgian before and, while the 28-year-old hopes to become the first, it is not his biggest goal.
"Having the Ballon d'Or would make me super happy, but I do not have an obsession," he said.
"I have always been a guy who plays for the team. When I go onto the field, I don't think about scoring three goals to have more of a chance in the race for the Ballon d'Or.
"Maybe I'll never have it. Maybe I'll win it once or twice. I first try to get my foot on the ground, we'll see what it will bring."
Hazard has made 12 appearances since joining Madrid from Chelsea in the summer, scoring one goal and making four assists.
He was expected to take Ronaldo's place as the Spanish giants' talisman, but he is not interested in being compared to the Portuguese icon.
"When I enter the field, I don't think that Cristiano was there before me and that I must do better than him," he said.
"I will not score more goals than Cristiano Ronado, for sure. But I will try to bring what I can do.
Article continues below
"In fact, what was complicated when I arrived was that two or three days before the first match I was injured and I took four weeks to recover. It delayed my preparation."
Hazard added: "People were right [to say I was overweight]. I was coming out of three weeks of vacation and I enjoyed it. I have always been a player who relaxed a little during the summer.
"I knew that at Real I would be criticised more than at Chelsea, but that's not a problem."
Sports