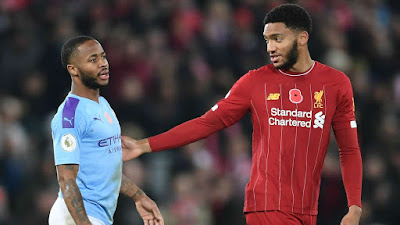 Raheem Sterling admitted emotions got the better of him in a bust-up with Joe Gomez, but the England star is moving on after being dropped.


The Manhcester City winger was reportedly involved in a physical confrontation with Gomez at England's training base on Monday and has been dropped for Thursday's Euro 2020 qualifier against Montenegro.
The FA announced on Monday that Sterling was dropped as a result of a "disturbance in a private team area at St George’s Park", ruling him out for the Montenegro match while leaving the door open for a return against Kosovo.
Sterling and Gomez were also involved in an altercation during Liverpool's 3-1 win over the Premier League champions on Sunday.
That win kept Liverpool unbeaten in the Premier League while opening up a nine-point gap between the two sides, with Leicester and Chelsea sandwiched in between in second and third place, respectively.
In a post on Instagram, Sterling said it was time to move on, but admitted he had let his emotions get the better of him during the incident.
"First and foremost everyone knows what that game means to me!" he wrote on his official Instagram account.
"Everyone knows that I am not that way inclined and more to the point ... both Joe and I have had words and figured things out and moved on.

"We are in a sport where emotions run high and I am man enough to admit when emotions got the better of me.
"We move [sic] this is why we play this sport because of our love for it – me and @joegomez5 are good we both understand it was a 5-10 second thing it's done we move forward and not make this bigger than it is.
"Let's get focus [sic] on our game on Thursday."
Article continues below
England are on the verge of qualifying for next year's tournament and face Kosovo in Pristina on Sunday after their clash with Montenegro.
A win against Montenegro will seal a spot at Euro 2020 for the Three Lions, who have amassed 15 points from six qualifying matches so far.
Following the international break, Sterling and Manchester City are set to take on Chelsea while Gomez's Liverpool will face Crystal Palace.
Sports