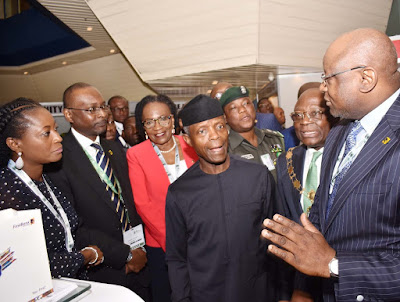 A different side to the story earlier reported about Vice President Yemi Osinbajo’s aide beating up Vanguard‘s Abayomi Adeshida on Thursday at a summit organised
by the Nigerians in Diaspora Commission (NIDCOM) has arrived. Multiple eyewitness have come forward to discredit the report, saying it actually didn’t happen.

As reported by PM News, a guest who attended the same event said she was surprised by reports that the journalist was beaten. The guest said it was far from the truth.
Honestly, I was surprised to read this story, it is very false. If he was beaten black and blue as he claimed in the report where are the pictures, during or even after the beating? This is ridiculous.
If someone is beaten, he should have pictorial evidence to show that he was beaten. We should be able to see his face and tell that he was beaten but that didn’t happen.
Another guest said although there was some misunderstanding between the journalist and a security aide, no one was beaten.
There was a misunderstanding of some sort but no one was beaten. It was nothing more than a scuffle. Immediately, they settled it and everyone went about their business.
A security aide who intervened in the misunderstanding also claimed that no one was beaten. He said:
At that point, he was told to please step back a little but he kept coming close. One of aides now had to push him back so he does not collide with the dignitaries at the event.
I personally intervened and apologized on behalf of my colleague. To say he was beaten is a lie. He wasn’t at all.
News