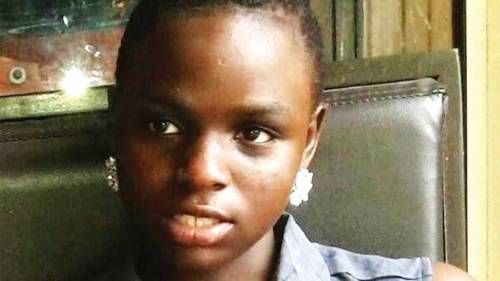 Thirteen-year-old Ese Oruru was abducted, raped and impregnated by Yunusa Dahiru, a man presumably old enough to be her father. From the day of her abduction, until she was rescued in the palace of the Emir of Kano, a series of drama ensued.


One such was the public uproar, demanding the prosecution of Dahiru, also known as Yellow, and the protection of Ese in centre of the traumatic drama.However, four years later, the public has moved on to other issues while the case, instituted by the Nigeria Police Force dragged on endlessly in court.Now a teenage mother, Ese, and her baby have received none of the assistance pledged by the government.“Ese is just there, nobody is helping her and the child,” a source familiar with the incident told SaharaRepoters.How the 13-year-old was abducted, raped and impregnatedAbducted, raped and impregnated— it is not clear if that was exactly the sequence, but the fact is that all those happened to Ese just as she became a teenager.In 2015, Ese was abducted from her mother's shop in Yenagoa, Bayelsa State. She was taken to Kano State and married off to her abductor, Dahiru, in the palace of Sanusi Lamido Sanusi, the Emir of Kano, who was a former governor of the Central Bank of Nigeria.Ese was renamed ‘Aisha’ following her forced marriage to Dahiru.The parents, Rose and Charles Oruru, fought to bring back their girl into their custody but for months, all their effort came to naught. The Nigeria Police Force, pressured by public outrage that the abduction and forced marriage had generated, swooped in and reportedly rescued Ese, who was by that time five months pregnant, from Emir Sanusi’s palace, six months after.The news of Ese’s pregnancy came with renewed demand for Yunusa to be prosecuted.Ebun Adegboruwa (SAN), a human rights lawyer, had described the incident as a case of child trafficking. Nigerians and prominent organizations in the civil space demanded justice for Ese and her family.Prolonged ProsecutionDahiru was arraigned at the Federal High Court in Yenagoa, Bayelsa State, on a five-count indictment charging him with abduction, child trafficking, illicit sex, sexual exploitation, and unlawful carnal knowledge.He pleaded guilty and was granted bail by Justice Hyeladzira Ejiya Nganjiwa but he could not meet the bail conditions.He was later released on bail in July 2016 after the conditions of his bail were varied.He was later arrested for breaking his bail privileges after he failed to appear before the court for four consecutive times without any representative or letter to his whereabouts.However, four years later, the case has continued to move from court to court with no end in sight.Annkio Briggs, a human rights activist, condemned the slow pace of the prosecution, saying the prosecutor has not “done well for the girl or her family”.“I did not believe then and I still don't believe now that either the Bayelsa State government or the Delta State government handled the matter— the criminal matter of her abduction and rape— very well,” she said.Failed PromisesShortly after Ese was rescued, the Bayelsa State government promised to take care of her and the pregnancy but this has remained a promise ever since.Briggs said the promises were merely for political reasons.“The government of Bayelsa state promised they would look after her and take care of her and sustain her which, I at that time, believed was not acceptable. What happened to her was criminal and the way that the government of Bayelsa state was handling it,” Briggs said.The family were forced to leave Bayelsa for Delta where the mother engages in petty trade in order to make ends meet.At some point, Ese went back on the streets to sell sachet water to augment the family’s income.Although she finished her secondary education, she has been unable to further her education. Now with a four-year-old child, the 17-year-old mother stays with her parents, doing odd jobs to provide for her child.A source close to the family said the teenage mother and her child received no help either from the government or the father of the child.Briggs expressed pessimism on the possibility that the government would fulfil its promises. She also blamed the state government for playing politics with the matter.“The government of Bayelsa state, like every other, tries to play down criminal offences such as Ese’s. The case was played down for political correctness. Our children and rights are being sacrificed on the altar of political correctness,” the activist explained.She also pointed out that the state government was being more sensitive to the religious beliefs of the abductor than it was to the predominant religious sentiments in Bayelsa state, where Ese was abducted.“When things like this happen, it means that the government has failed the people," Briggs said.