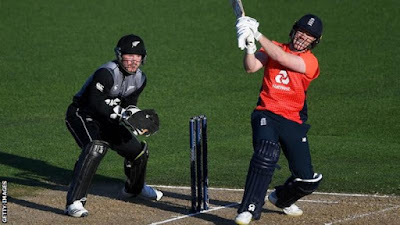 The tourists made 241-3 - their highest T20 score - with Dawid Malan making an unbeaten 103 from 51 balls, the fastest century by an England batsman in the shortest format.


"I don't think we've ever batted in that manner or posted a score like that, so to do it against a very strong line-up and come out winners is extremely satisfying," said Morgan.
England set several national records in Napier, including:
Malan and Morgan teamed up with England 58-2 off 7.2 overs and were parted 182 runs and 74 balls later.
Morgan made 91 off 41 balls in an innings which contained seven fours and seven sixes.
It means England have levelled the five-match series at 2-2 with one game remaining, having rested a number of senior players for the tour.
"I said before the game that our method doesn't really waver at any stage, just our skill level needs to get better," Morgan told Test Match Special.
"Today it was right on the money, particularly with the bat. In T20 cricket you have to continue to take risks."
The final match takes place in Auckland on Sunday at 01:00 GMT.
There, Malan will be hoping to continue a run of form which has seen him become the first player to register more than four 50+ scores in his first 10 T20Is.
He now averages 57.25 in his nine matches to date and is only the second England batsman to make a T20 century after Alex Hales in 2014.
"To become the next in line or establish yourself in this team, you have to do something special," Yorkshire's Malan, 32, said.
"For me to do this, hopefully I've put a step forward or half a step forward to proving I can actually play at this level in this format and I can push players above me.
"You work so hard to get to this level: you have to score a lot of domestic runs and put in a lot of hours and sacrifices, so to be able to do it on the international stage and score runs, it's a relief when you finally reach a landmark.
"I didn't know whether I should scream or just be calm but I have a way that I celebrate and I just stuck to it."
Sports