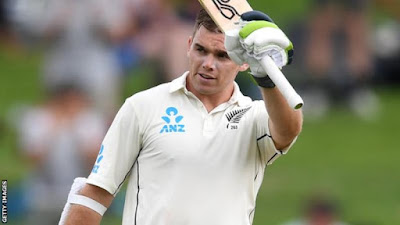 The opener hit an unbeaten 101 to help the Black Caps recover from 39-2 to reach 173-3 before rain ended play early at Seddon Park.


Latham shared a third-wicket stand of 114 with Ross Taylor, who made 53, after England won the toss.
New Zealand lead 1-0 in the two-Test series.
Play will start half an hour early at 21:30 GMT on Friday to make up for the lost time, with 35.3 overs lost to rain.
There was little assistance for the bowlers, despite the green pitch, and England will have to remain disciplined if they are to break through the Black Caps line-up.

Joe Root has often turned to vice-captain Ben Stokes when in need of a breakthrough, but the all-rounder struggled through only two overs with the ball.
Stokes grimaced and felt his left knee during his short spell in the afternoon, and limped back to his fielding position just before tea. He did not bowl again.
England may have compensated for Stokes' injury with their team selection; they opted for with five seamers and no frontline spinner, which allowed for cover for Stokes.
It did, however, leave the team feeling unbalanced. Ollie Pope, playing in his fourth Test, will have batted in three different positions if he comes in at seven in England's innings, while debutant Zak Crawley, a top-order batsman, will bat at six.
A back injury to Jos Buttler meant Pope had to keep wicket for only the sixth time in his first-class career, while Woakes replaced left-arm spinner Jack Leach.
England were not too expensive with the ball, nor could they be accused of not trying. But it seemed as though they were missing some energy and an ability to work their way back into the game as New Zealand, who made 615-9 in the first Test, ground them down again.
Chris Woakes, who has struggled away from home, was the pick of the bowlers with 2-41 but having opted to bowl first on a green pitch, England would have been hoping for more success.

'King of the leg side' tons up

New Zealand did not make a convincing start. Jeet Raval's poor form continued as he flayed a Stuart Broad delivery to first slip, while captain Kane Williamson fell to a fine delivery from Woakes that just moved off the seam and was well held by Root.
It was down to Latham to steady the innings. He is quietly becoming a prolific Test opener; he averages 83 in the format in 2019 and has scored three centuries this year.
He had his luck. He overturned an lbw decision off Woakes on 49 and was dropped by Stokes, diving to his left at second slip, on 66.
England fed Latham's leg-side play throughout the day. He scored 72 of his 101 runs in that area, leading former New Zealand batsman Jeremy Coney to nickname him "the king of the leg side".
Latham reached his 11th Test century just before tea, stepping down the pitch to Root's part-time spin and crunching four through mid-on.
His partnership with Taylor frustrated England, with the two scoring at a decent pace. Taylor was given out on 25 but reviewed the lbw decision, and survived after the technology appeared to show an inside edge.
It was ultimately a poor shot from Taylor, edging Woakes to first slip, that ended the stand, rather than a breakthrough by the bowlers.

England 'not in the worst position' - what they said

England all-rounder Chris Woakes on BBC Test Match Special: "With a session still to have gone, I don't think we're in the worst position.
"Of course we'd have liked a couple more wickets but again if you stick two on that early, we're well in the game. We just felt there was something there we could work with."
New Zealand batsman Tom Latham: "We have a lot of hard work to do tomorrow. We will have to assess conditions early on and hopefully we can keep building partnerships like we did today.
"When you lose toss and get put in, to be in position we are is nice."
England & Middlesex bowler Steven Finn: "I agree with England's decision to pick five seamers - it's almost four and a half really because we heard grumblings in the last Test that Ben Stokes is struggling with a knee injury."
Former New Zealand captain Jeremy Coney: "Latham is certainly one of those players who is accustomed to getting to big hundreds. There was a good measure of control about his innings.
"He hasn't looked hurried. As soon as England lose their line a little bit, he's been able to get it through."
Sports