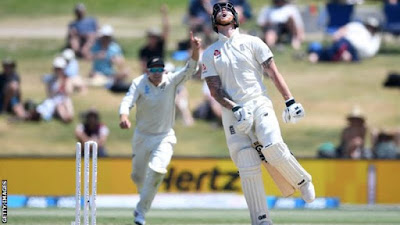 Resuming on 55-3, England needed to bat through the day to save the Test but were bowled out for 197 with 21.4 overs remaining in Mount Maunganui.


Joe Denly made 35 from 142 balls and Ben Stokes 28 from 84 but no batsman could produce a defining innings.
Pace bowler Neil Wagner took a superb 5-44 and Mitchell Santner 3-53 as the Black Caps secured a 1-0 series lead.
The second and final Test begins at 22:00 GMT on Thursday.
New Zealand could be without Trent Boult, who was absent for much of the day with a rib injury, but the performance of his other bowlers will offer captain Kane Williamson some reassurance.
England were let down by their shot making and will be left to rue the collapse on the second day that prevented them posting a substantial total.
It is perhaps fortunate for England the series is not part of the World Test Championship, meaning that they have not lost out on any points in defeat.
But it was a fine all-round performance from New Zealand, and leaves England with plenty to ponder before they travel to Hamilton.

Stuart Broad said before play on day five that England "don't just believe we can save this game, we expect to".
At times, it looked as though they might. Joe Root and Denly batted serenely in the first hour of the day and Stokes and Denly showed real grit in their 52-run stand.
While New Zealand were disciplined with the ball, limiting England's scoring options, the tourists were largely architects of their own downfall. They were passive and, when they did decide to hit out, they picked the wrong shot to the wrong ball.
Root was caught tamely at gully off a Colin de Grandhomme short ball, Stokes dragged a wide delivery on to his stumps, Ollie Pope thrashed another wide ball to short cover, where Santner took a superb diving catch, and Jos Buttler was bowled leaving a yorker.
Only Denly could really claim to have fallen to a good ball, a rising short delivery from Wagner that caught his glove as he tried to shoulder arms.
Much of England's pre-series talk was about patience, and they had the perfect template to follow after watching BJ Watling's lengthy double century over the previous two days.
On this evidence, it will be a long learning process.

New Zealand are second in the Test rankings and in this victory they demonstrated why - this was a complete performance, grinding England down with the bat before preying on the tourists' long-held batting weaknesses.
With strike bowler Boult only able to bowl one over before walking off with a rib injury, New Zealand had to rely on their change bowlers to take the wickets.
A superb spell from Wagner, who switched to round the wicket after becoming frustrated with the footholes, did the damage. Known as a bowler who favours short-pitched bowling, he instead used his variations with the old ball and found movement with the new one in Boult's absence.
Sam Curran and Jofra Archer provided some late entertainment but it never felt as though New Zealand were panicked, and Wagner wrapped up the innings in consecutive balls to dismiss Archer and Broad.
Left-arm spinner Santner did not add to his three wickets from overnight, but he found enough turn and bounce to keep England's batsmen wary.
Should Boult miss the next Test, New Zealand could call on extra pace, in the form of Lockie Ferguson - the second highest wicket taker at this summer's World Cup - or Matt Henry. They have plenty of options - something which England will be wary of.

England captain Joe Root: "We did a lot of good stuff - we just need to do it for longer. It's different to the style of cricket we've had to play in our home conditions.
"We can't panic and think it's the end of the world. We are working hard behind the scenes and if we come back strong, we'll hopefully level it up."
Ex-England batsman Mark Ramprakash on TMS: "England didn't quite get their mentality right.
"Stokes said runs would be important, but they didn't bat normally. England went nowhere. It's that indecision that cost Root his wicket."
New Zealand captain Kane Williamson: "It feels great to win a Test match and it took a huge amount of work to get past their total.
"It was huge heart from our middle order to get over 600 and that gave us the only chance of winning."
England bowler Steven Finn on TMS: "There are lessons for England to learn.
"If you look at England's first innings, they'd laid a platform after day one but didn't capitalise on day two, and that's probably the difference."
Sports