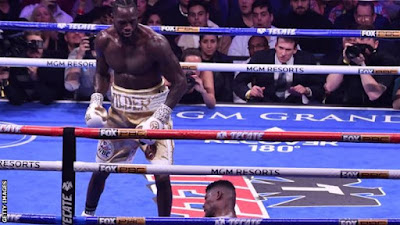 The Cuban had dominated the first six rounds, but was knocked to the floor by a stunning right hand from Wilder, 34.


He retained the WBC world heavyweight title with his 42nd win from 43 fights, 41 of those by knockout.
"I think I earned my respect to say I'm the hardest-hitting puncher in boxing history. Period," said the American.
"I do what I do time and time again. I give people great fights and great knockouts."
Wilder has produced 10 successful defences of his WBC belt, which he has held since January 2015.
The only fight he has not won in his career was the draw with Tyson Fury in Los Angeles in December 2018. Even then, he still put Fury on the canvas in the ninth and the final round.
But the Alabama boxer feels his achievements deserve more recognition.
"You've got to give me my credit," he said. "It's sad that it took me over 40 fights to get the recognition that I truly deserve.
"When people see me, they have never seen my style. It took them a while to get used to what I display, my talent that I present to boxing.
"It's different to any other fighter. It's not textbook. You can't really teach it and that's what makes me unique from the rest of these fighters."
View more on Twitter
A rematch with Fury is slated for 22 February and the Briton's trainer Ben Davison was ringside in Las Vegas on Saturday to see Wilder's win.
Responding to Wilder's victory, Fury tweeted: "Wilder has nothing more than a punchers chance vs me, I'm gonna school [him] even more than the first fight."
Sports