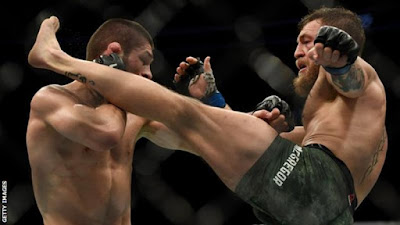 The 31-year-old Irishman has not competed since losing to Russian Khabib Nurmagomedov in October 2018.


Earlier this month McGregor was convicted of assault following an altercation in a Dublin pub in April, and fined 1,000 euros (£861).
In October he revealed his plans to return to UFC action in 2020.
Seven months earlier, McGregor had announced his retirement from mixed martial arts on social media.
He first announced his retirement in April 2016 but issued a retraction later that month.
In March, McGregor was arrested in Miami for allegedly smashing a fan's phone, but the charges were later dropped.
His return will be part of UFC 246 and UFC president Dana White confirmed: "Conor has signed and Cowboy is ready to go."
McGregor, who lost a professional boxing bout in the 10th round to Floyd Mayweather in 2017, has a 21-4 record in UFC and in 2016 became the first fighter to hold belts in two weight categories at the same time.
American Cerrone, 36, lost his last fight in the first round to Justin Gaethje in September.
Sports