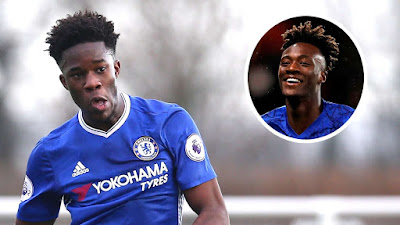 Chelsea academy striker Ike Ugbo has praised Tammy Abraham's role in aiding his development and explained how Frank Lampard's policy of promoting young players has spurred on those in the youth ranks at the club.


Ugbo is currently on loan at Roda JC in the Dutch second tier where he's scored six goals in 12 league matches having previously spent time at the likes of Barnsley, MK Dons and Scunthorpe United.
Reflecting on his positive start to life in the Netherlands, Ugbo revealed that a move abroad has been a big positive for him and that he still has ambitions of eventually playing in the Premier League.
"It is one of the best starts I have had so far in all of my loan spells," Ugbo tells Goal. "Everyone is looking after me here, while people at Chelsea are keeping in contact with me.
"I had to approach this loan differently and be more prepared because it is a lot different from being in England. I think I have been progressing well and it has come out on the pitch with good performances every week. I am getting my goals and assists.
"On my first loan [at Barnsley], I didn't feel I showed the qualities that I really had. I think it was just a different world for me to go out into first-team football and adapt. I don't think that I adapted quickly enough.
"I am showing more of the qualities that I had when I played in the Under-23s [at Chelsea] and that potential that I have to push on to the next level. They were all learning curves really and it has moulded me into who I am now.

"When I first decided to go on loan, I wasn't really open-minded to going abroad. I previously had options to go abroad but I was more keen on staying in England and to try to work my way up the divisions to get to the Premier League.
"As I got older, I started to see more European football and it suits me better, especially now at this time in my career. My previous loans weren't really a style of play that suited me, especially after training at Chelsea.
"When I was playing Under-23s, we had the ball all the time and we weren't chasing as much. I am more of a technical player. I am not a long-ball type of striker. Coming out here was the best thing for me at this stage in my career. I am doing well.”
Abraham, Mason Mount, Reece James, Callum Hudson-Odoi and Fikayo Tomori all lined up alongside Ugbo at academy level and it is the Blues' leading scorer who has had the biggest impression on him.
"He does well with his understanding of the game and his positioning," Ugbo says. "He gets so many goals from close range and it (learning from Abraham) helped me a lot with the goals I've scored. You get the goals simply when you are in the right positions.
"I was a midfielder before, so I learned from those movements. You have to get your positioning right and make sure you are on the right side of the ball. Tammy was always doing well with those things. When I was younger, I was watching his games and analysing it to see what I could add to my game to benefit me.
"You wouldn't think so many [academy players] would get into the team. It is great to see everyone getting a chance at such a young age and doing well in competitions like the Champions League. It is really good and something to try to live up to.
"They have done everyone in the academy proud. It shows that once you give them opportunities they will take it and prove that they can be playing at the top level."

Ugbo also reflected on the impact of Didier Drogba and John Terry during his formative years at the club while also giving an insight into the loan system at Chelsea and how the feedback process works.
"What Drogba did in the Champions League was special,” he says. “I saw him when I was in the Under-11s. He came to us and I was starstruck when I saw him. It motivated me to try to get to that stage after meeting someone who achieved so much.
"John Terry was always helping the young players with what they had to work on, what you have to do to make sure that you are on it 100 per cent in the training session. He really helped me. He will be a really good coach.
"The aim is to go back to Chelsea but you never know in football as you could end up anywhere in Europe. I definitely believe that the first division in Holland could be good for me.
Article continues below
"We get all the help from the loan system and they look at getting the best out of you for the temporary club. If it isn't your time for Chelsea's first team, they can send you to Europe and that can bring something else out in you. It helps your game in a different way.
"I have Tore Andre Flo who comes to my games sometimes. The loan staff watch all the games and keep in contact. They send me clips of what I need to work on and send support about what I am doing well.
"It comes with notes and paragraphs of detail about what they have been watching. I have a top striker watching me and it helps me a lot. I want to develop my game to get to that level."
Sports